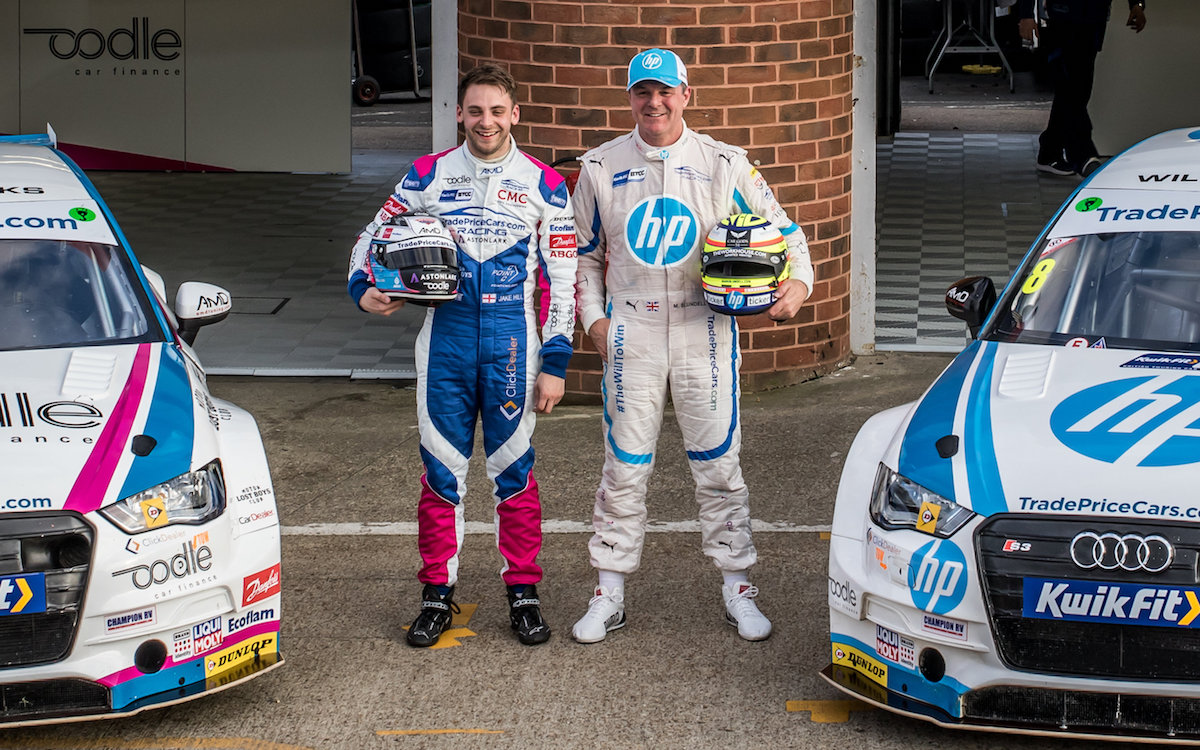 Having been involved in the series in a sponsor capacity for a number of years, the award-winning Essex-based motor dealership takes its involvement in the BTCC to the next level in 2019, having elected to enter its own team alongside technical partners AmD Tuning.

The past month has seen the team hard at work testing around the UK, with drivers Mark Blundell and Jake Hill racking up the miles at the wheel of the two Trade Price Cars Racing Audi S3s.

For former F1 racer and Le Mans 24 Hour winner Mark, the season opener at Brands Hatch will signal his first step into the highly-competitive BTCC arena as he makes his return to top level motorsport.

The 52-year-old, who is competing this season with support from global technology giant HP, has tested at a number of circuits during the off-season to get up to speed in the Audi and lapped within a second of the record-breaking fastest lap set when the full field hit the track at Brands Hatch last week.

Mark goes into the weekend with realistic aims in place and his focus firmly on maximising his track time to learn as much as possible about the unique nature of touring car racing.

Team-mate Jake returns to the circuit where he secured the best result of his BTCC career, a second place twelve months ago, eager to impress having showed top ten pace in the Season Launch test.

Pre-season has seen Jake able to complete more testing than at any stage in his touring car career to date; a fact that leaves the 25-year-old in a strong position going into his fourth full season in the series.

Buoyed by the performance of the Audi in the running completed over the past month, Jake will hope to fight for points finishes in all three races to make a solid start to his bid for the Independents’ championship title.

Mark Blundell, #8 Trade Price Cars Racing Audi S3, said:
“Although it would have been nice to have a bit more dry running ahead of the season opener, the team has done a fantastic job to get us out testing and I’ve been learning every time I’ve gone out on track.

“Whilst I have a lot of experience of racing at the highest level, the Audi is totally different to anything I’ve driven before. I’ve been used to racing with more power, less weight and a lot more downforce so it requires a different approach. It’s like a golfer who has played for 30 years and then has to change their swing; it needs a bit of time.

“Being completely honest, I know there is more to come from me but that is down to time in the car. Do I expect to go out at Brands Hatch this weekend and fight with the big boys? No, because that isn’t realistic. But I do think we can get involved in the pack, and I just want to get stuck in and enjoy myself.

“It’s a long season and this is only the first event so I have to use it to keep learning as much as I can. There are a lot of elements that are going to be new to me, like the three races in a day and the challenges that come from managing the tyres on a front wheel drive car, but I’m really looking forward to it and can’t wait for the weekend to get underway.”

Jake Hill, #24 Trade Price Cars Racing Audi S3, said:
“We’ve been able to complete some good running ahead of the new season and I’m going to Brands Hatch this weekend in a really positive frame of mind. Dan and the guys at Trade Price Cars have worked really hard over the winter to pull this programme together and the whole environment around the team is positive as we approach round one.

“In the testing we’ve been able to do during pre-season, it’s clear to see that the Audi is a totally different car to when I drove it previously [in late 2015]. The guys at AmD have put a lot of hard work into making improvements and alongside the work that Swindon have done on the engine, I have a really good feeling about our chances.

“There are a few things we’ve been able to find during testing from working alongside the Hondas that are in the other side of the AmD garage and hopefully we can feel the benefit of that when we hit the track in anger, as you never know what people are really doing in testing.

“For me, the target this weekend is to bring home three solid points finishes as that is the most important thing to do at this stage to give us a platform to build. I’m looking forward to working with Mark and let’s see what we can do on track.”