The new training regime that I’m trying to follow on a weekly basis is quite a hectic thing to fit into what is already a busy schedule.

As well as working a full-time job in travel from Monday to Friday, there’s my freelance motorsport work to sort, time to spend with the family, and the various activities that the kids are involved with before I even leave the house to hit the gym.

With that in mind, any way in which I can combine the various things that are going on is a bonus – although it’s hard to try and work out how to mix fitness with sitting writing a travel blog…

When it comes to time with the family however, things are totally different and it’s a lot easier to try and do something that complements my training whilst also getting the kids involved.

Truth be told, it was the kids who played a part in me deciding I needed to get in shape, with the eldest having remarked one day on how I was a ‘fattie’ whilst playing football on the park.

I know that kids just say stuff but it still struck a nerve, as I didn’t want to end up being that dad who can’t do things with his son or daughter because he is always out of breath and too unfit to do so.

I’m lucky that the kids are at that age – seven and four – where they are happy to entertain themselves but also where they still want us as parents to get involved and act like big kids ourselves.

Which brings me to my scooter.

Now lets be honest. Most of us will have had a scooter at some point in our lives, but there won’t be that many who will have invested in one in their mid 30s as I’ve done.

Truth be told, I wasn’t really aware that adult scooters existed until I saw that my mate Ian had got one, and I figured it would be a good way to keep fit and be something I could do with the kids.

So, out I went and invested some money I’d been given for my birthday in a Micro Suspension Scooter.

It’s similar to the kind of colourful offerings that Micro provide for kids, but designed to deal with the extra weight of an adult and featuring a larger frame and – on my model – suspension on the front wheel.

That probably adds a bit more weight but it’s still far from heavy, and slightly more comfortable when dealing with the bumps to be found on some of the footpaths around where we live.

It was one of those impulse buys that I’ve not really used as much as I hoped until recent months when it’s started to come out of the shed a bit more often.

And it’s now that I’m really starting to appreciate what a good bit of kit it actually is.

I can head out with the kids on the park for a race rather than standing watching, and whilst the weather has been good, we’ve been able to leave the car at home and scoot to school instead.

When you’re a kid, you whizz about on a scooter for ages and just have fun, but when you’re all grown up, you forget how hard riding a scooter can be.

It’s actually proving to be a great way in which to get some additional exercise in a fun kind of way, building up the leg muscles and getting the heart rate going at the same time.

The fact that the kids can get involved too is an added bonus and it’s certainly more fun than pounding the streets going for a run as I have done in the past.

Quite a few times I’ve had comments from people asking if it’s really a scooter for adults whilst others have no doubt sniggered at the sight of me rolling past, but I’d only point them to the old saying that you shouldn’t knock something until you’ve tried it.

It might not be the most obvious mode of transport to consider but if you want stay in shape, have a bit of run and relive your youth at the same time, then there are few things to beat it… 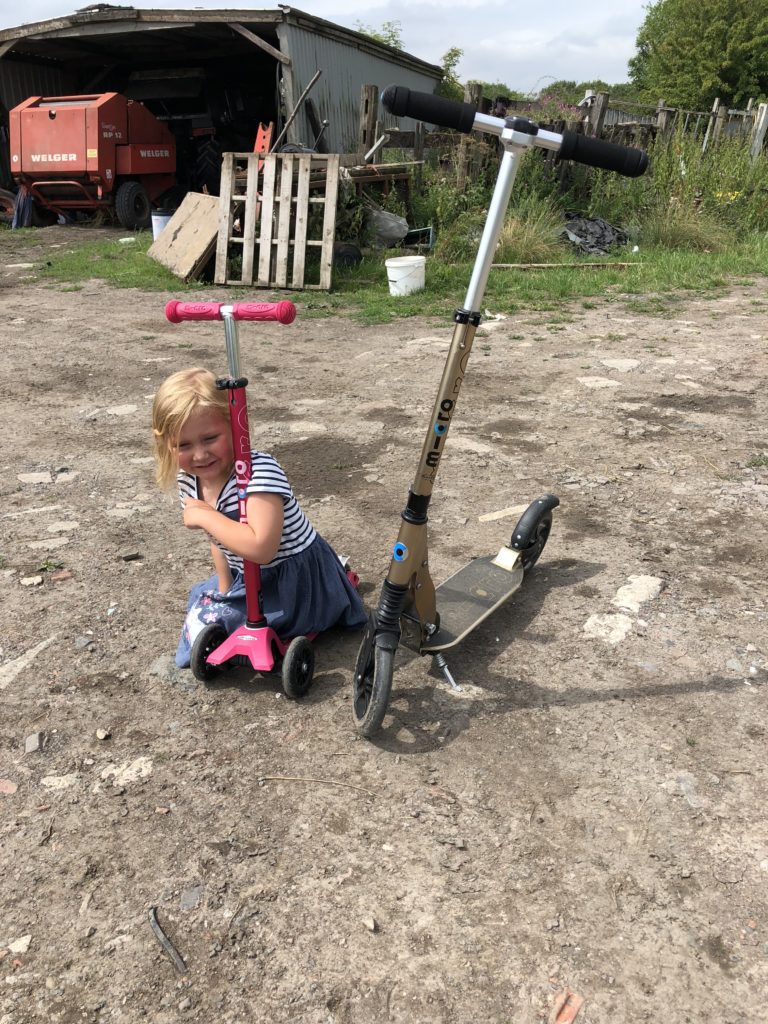