Rising star Harry King secured the early advantage in the race for the 2019 Millers Oils Ginetta GT4 Supercup with a fine performance during the opening meeting of the year at Brands Hatch. 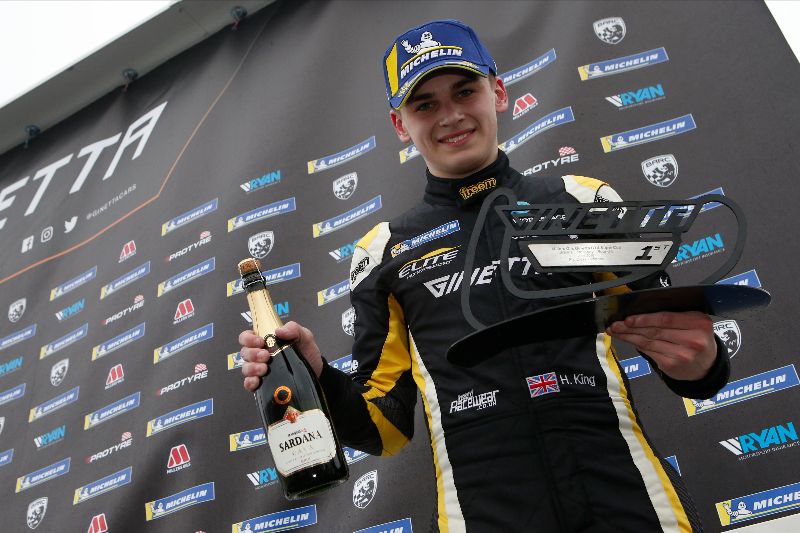 Returning to the series for a second year with the Elite Motorsport team, Harry – from Holyport in Berkshire – secured podium finishes in all three races and picked up his first victory of the year to lay down a marker in the highly competitive one-make series.

On the pace during Friday practice, Harry secured pole position for the opening race of the weekend after topping the times in qualifying, beating former touring car racer Will Burns to top spot on the grid.

Light rain ahead of the start of race one left teams with a decision to take on tyres, with Harry electing to stick with slick tyres in line with the majority of the Pro class field.

Losing places off the start to a number of wet-shod drivers behind, it soon became clear that slicks had been the wrong call as the rain intensified. However, a mature drive from the teenager saw him keep his car on track in tricky conditions to cross the line in seventh place overall as the best placed driver on dry tyres.

Although far less than he had hoped for from the season opener, the fact that only one Pro driver had selected wet tyres meant Harry was second in class; taking a podium finish and securing a solid haul of championship points in the process.

Second on the grid for the second race on Saturday afternoon, Harry shadowed leader Reece Somerfield through the early laps before making his move for the lead on lap five – and then set about pulling away at the front.

Lapping comfortably quicker than the cars behind, Harry eased away at the front and – even though a Safety Car period brought the field back together – the teenager stamped his authority on the race after the restart to eventually secure victory by more than twelve seconds.

The final race of the weekend saw Harry complete a hat-trick of podium finishes with a solid run to second behind Burns, which means he heads away from Brands Hatch as the early championship leader.

Harry will be in action next at Donington Park on the weekend of 27/28 April.

“I’d say that was mission accomplished for the first weekend,” he said. “I don’t think there is much more I could have done with the opening race and the weather conditions, but the second race was fantastic. The team did a great job with the car and to win in the way we did was brilliant.

“In the final race, I worked hard to get up to second but when I did, things were quite even with Will in terms of lap times and I had to settle for second – but two seconds and a win is a great haul of points from the weekend as a whole.

“It was important for me to make a statement in the opening round and lay down a marker for the season ahead, and I’d rather go to Donington Park as the leader than the chaser. Hopefully we can do similar there to maintain our early position in the standings.”