The Cobra Sport AmD with AutoAid/RCIB Insurance Racing team was able to celebrate a breakthrough victory after a dramatic opening to the new Kwik Fit British Touring Car Championship season at Brands Hatch. 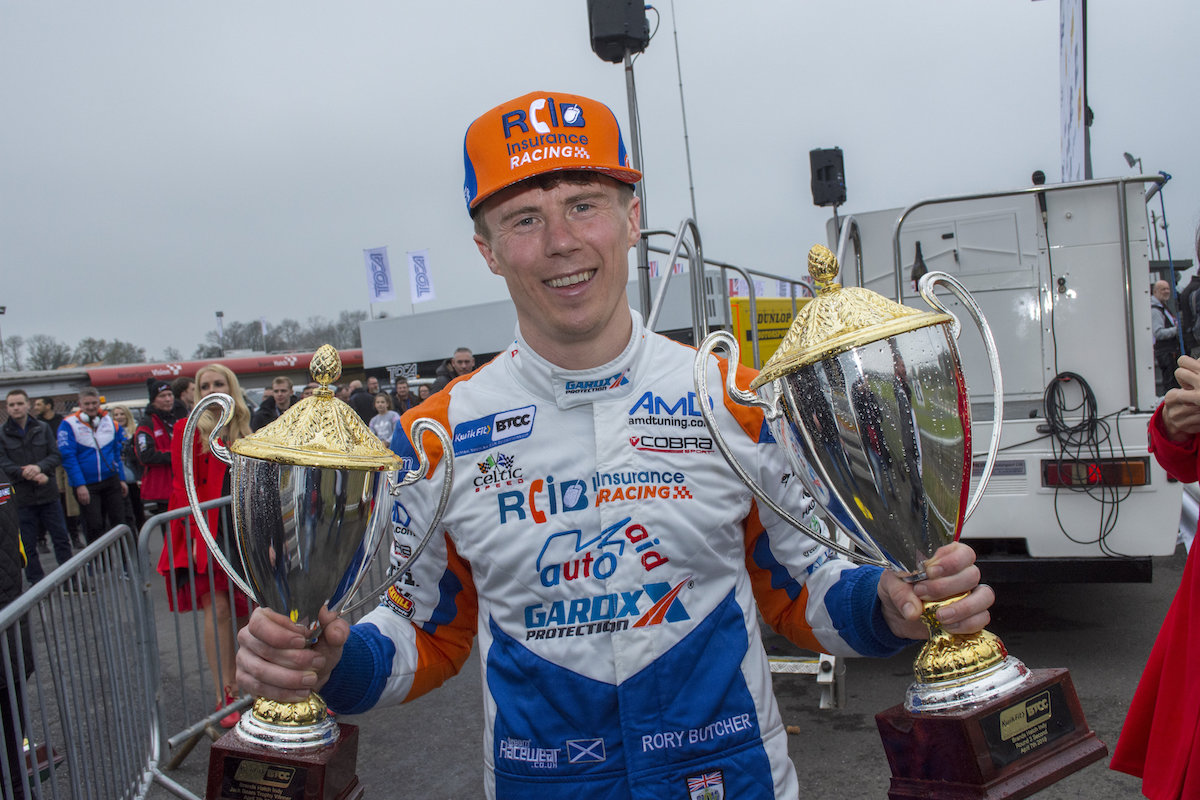 The West Thurrock-based team headed into the season opener with high hopes of success on track after a solid pre-season testing programme with the Honda Civic Type Rs it is campaigning for the first time this year.

Fife racer Rory Butcher would enjoy a strong start to his season having qualified eleventh on the grid for the opening race of the year in a tricky session held in damp conditions on Saturday afternoon.

Early morning rain on race day led to a gamble on tyres for the opening 24 lap encounter of the year, with Rory electing to go with wet tyres on his Honda – as was the case for most of the drivers ahead.

Whilst that proved to be the wrong call as the anticipated heavier rain didn’t arrive, Rory fought hard to secure a top ten finish as the third best driver on wet tyres.

An eighth place finish followed in race two on the less favourable soft tyre, with the reverse grid draw putting the Scotsman fourth on the grid for the final race of the weekend.

Whilst he slipped back to fifth early on, Rory fought back ahead of Tom Ingram’s Toyota into fourth place and then took advantage of a battle between Stephen Jelley and Matt Neal to pass both drivers in one go exiting Graham Hill Bend on lap 16.

Lapping quicker than leader Tom Chilton ahead, Rory set about trying to chase down his rival before eventually crossing the line in second place for his maiden podium finish. However, a post-session penalty for an on-track incident for Chilton then promoted Rory into first place – meaning a first victory for both driver and team.

Rory also secured Jack Sears Trophy honours for the weekend thanks to his combined results across the three races.

Leeds-based team-mate Sam Tordoff however endured a challenging start to his season as a result of an unidentified issue with his car that would hamper his challenge on race day.

Despite an off in qualifying that resulted in him losing his quickest time, Sam had qualified ninth on the grid for race one only for his race to come to an end on lap two when on-track content damaged the rear suspension on his car.

At the back of the field for race two as a result, Sam fought his way forwards to 19th place at the finish and then just missed out on the points with 16th in race three as he was unable to build on the pace shown throughout pre-season testing.

Rory Butcher, #6 Cobra Sport AmD with AutoAid/RCIB Insurance Racing Honda Civic Type, said:
“It isn’t the way that you want to win a race, but you need a bit of luck in the BTCC sometimes and I’ll certainly take it. I’m so pleased to be the person who gives the AmD team its first win, and it’s an amazing feeling to be able to call myself a BTCC race winner.

“I’m delighted with the weekend as a whole as we battled back from qualifying. I stayed calm and tried to progress in each race, and I knew that we could take advantage of it we had the chance to be near the front.

“I can’t thank the team enough and we showed strong pace in each race in different conditions. The only mistake was not to roll the dice on the tyres in race one, but it’s a nice feeling to have some silverware and I’m buzzing about the way things have gone.”

Sam Tordoff, #600 Cobra Sport AmD with AutoAid/RCIB Insurance Racing Honda Civic Type, said:
“It’s hard to know what to say about the weekend to be honest. We had such high hopes of a strong performance but there has been a fundamental issue on my car that we just haven’t been able to resolve.

“We have to just put Brands Hatch behind us, and my season will start when we get to Donington Park in a few weeks time.”

Shaun Hollamby, Cobra Sport AmD with AutoAid/RCIB Insurance Racing team principal:
“This really has been a weekend of mixed emotions for us as a team. We came here with such high hopes of a strong performance for both drivers and the fact we were disappointed with our best ever qualifying performance shows how our expectations have been raised this year.

“On one hand, I’m delighted for Rory with the results he had gained on track as he has done a great job and has shown why we rate him so highly as both a driver and a person. He’s been on the pace throughout race day and for him to take our first win is brilliant.

“On the other, it’s so disappointing for Sam as he has been quick throughout testing and then when it mattered today, he has been unable to show it through no fault of his own. His car will be stripped down when we get back to base to get to the bottom of the issues there have been today, as the results are certainly down to something with the car rather than anything he has done behind the wheel.

“When we get to Donington Park, we’ll look forward to both cars running towards the sharp end.”