The Richardson Racing team enjoyed a winning start to the new Michelin Ginetta Junior Championship season as the 2019 campaign kicked off at Brands Hatch. 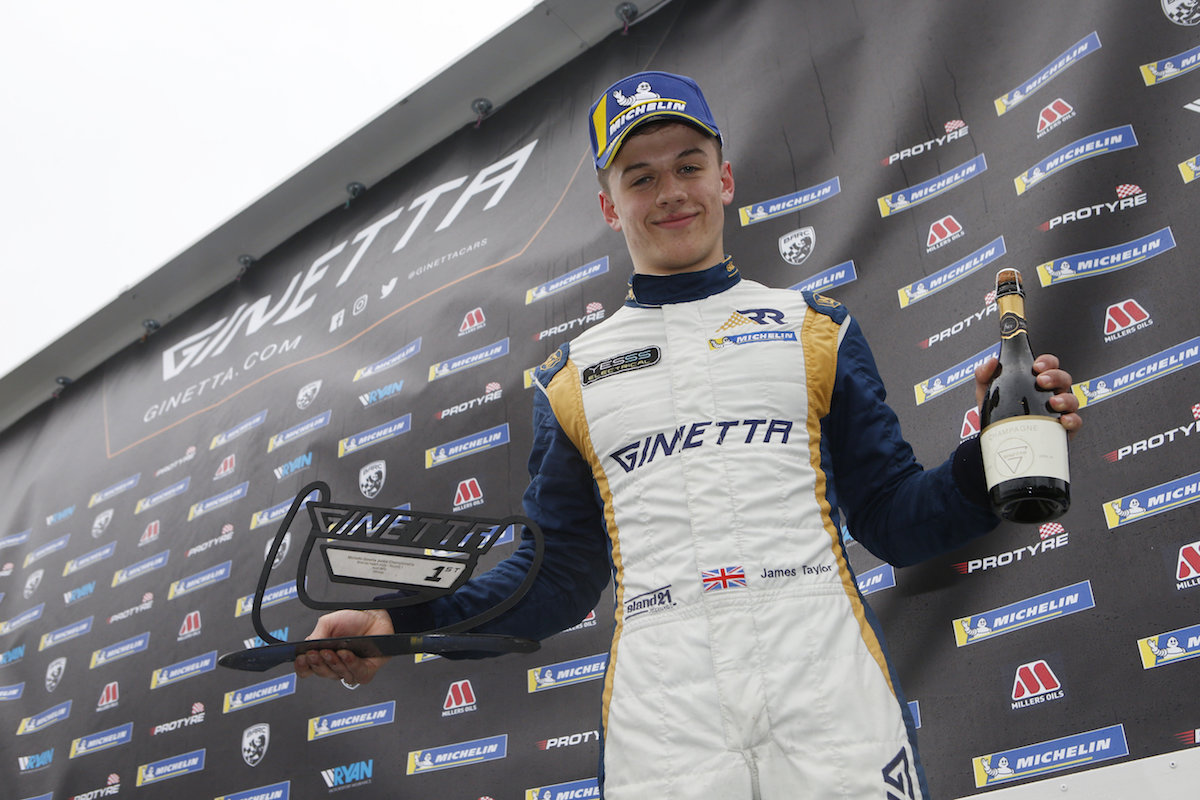 The Corby-based team headed to the Kent circuit hoping to challenge towards the front of the field, with returning duo James Taylor and Will Martin being joined by series newcomer Casper Stevenson.

The three youngsters all lapped inside the top eight in a tightly fought free practice session on Saturday morning, but qualifying later in the day brought with it a new challenge in drizzling conditions.

Yorkshire racer James would be the class of the field as he romped to pole position by more than eight tenths of a second; a margin that had covered the top 17 drivers in the early practice running.

Casper meanwhile secured seventh on the grid for his debut race, with Will one place further back in eighth amongst a bumper field of 25 drivers.

The damp conditions would remain for the opening race of the weekend, but James made his pole position count as he led from start-to-finish – surviving a Safety Car restart and seeing off the challenge of Zak O’Sullivan to take his maiden victory in the series.

Casper and Will meanwhile would come through the opening lap unscathed and stayed out of trouble, with Casper running in sixth and Will eighth when the race proper got underway after the early Safety Car.

Will moved ahead of Tom Emson into seventh within a lap of the restart and then got ahead of Casper; with the pair running together through to the finish to finish sixth and seventh overall.

That was a result good enough to see Casper take to the podium as third best of the rookie drivers.

Race two would see all three drivers starting inside the top six, with Will and James sharing row two, and Casper lining up just behind in sixth spot.

It would prove to be an action-packed race for all three drivers, although for Casper, it would be over before it had really got started when he was caught up in an incident in the midfield on the opening lap that resulted in him being forced into retirement.

Will and James meanwhile would be firmly in the fight for victory throughout the race, but a late trip through the gravel when he ran offline making a move for position saw Will slip down to eighth place.

James meanwhile saw a surefire podium taken from his grasp on the final lap when he suffered a loss of brakes going into Druids; ending his race in the gravel trap.

With two of the 26 races complete, James sits fifth in the championship standings, with Will in seventh and Casper in 13th – and fifth amongst the rookie racers.

The trio now head to Donington Park for round two – a triple-header featuring three races – later this month.

Will Martin, #10 (Battle, East Sussex), said
“It was a good weekend for me and I’m pleased to have started the season in a reasonably strong way. Sixth place in the opening race was my best result in the series so far and I showed that I have the pace to run at the front in race two.

“There are certainly more positives than negatives for me to take away from Brands Hatch and I know that there is still more to come from me as well.”

Casper Stevenson, #25 (London), said
“I think it’s a case of what might have been for me this weekend. I got held up a bit in qualifying but to then come away from the opening race with a place on the rookie podium was a great way to start the season.

“I got a really good start in race two and it’s a bit hard to take that I ended up being forced out through no fault of my own; it leaves a bit of a sour taste in the mouth. I just have to put that behind me now though and look ahead to Donington Park where I think we can be strong and fight for some strong results.”

James Taylor, #66 (Rotherham, Yorkshire), said
“Even with the DNF in race two, this weekend has been spot on for me. To get my first win in the series is absolutely brilliant and I feel like a huge weight has now been lifted from my shoulders. We showed great pace in qualifying and in the races, and it gives me a lot of confidence going forwards.

“I won’t dwell on race two as there was nothing that I could have done, and I’ll head to Donington Park next time out keen to challenge for more silverware.”