BTC Racing leads the way in the Kwik Fit British Touring Car Championship after a stunning performance on track during the season opener at Brands Hatch. 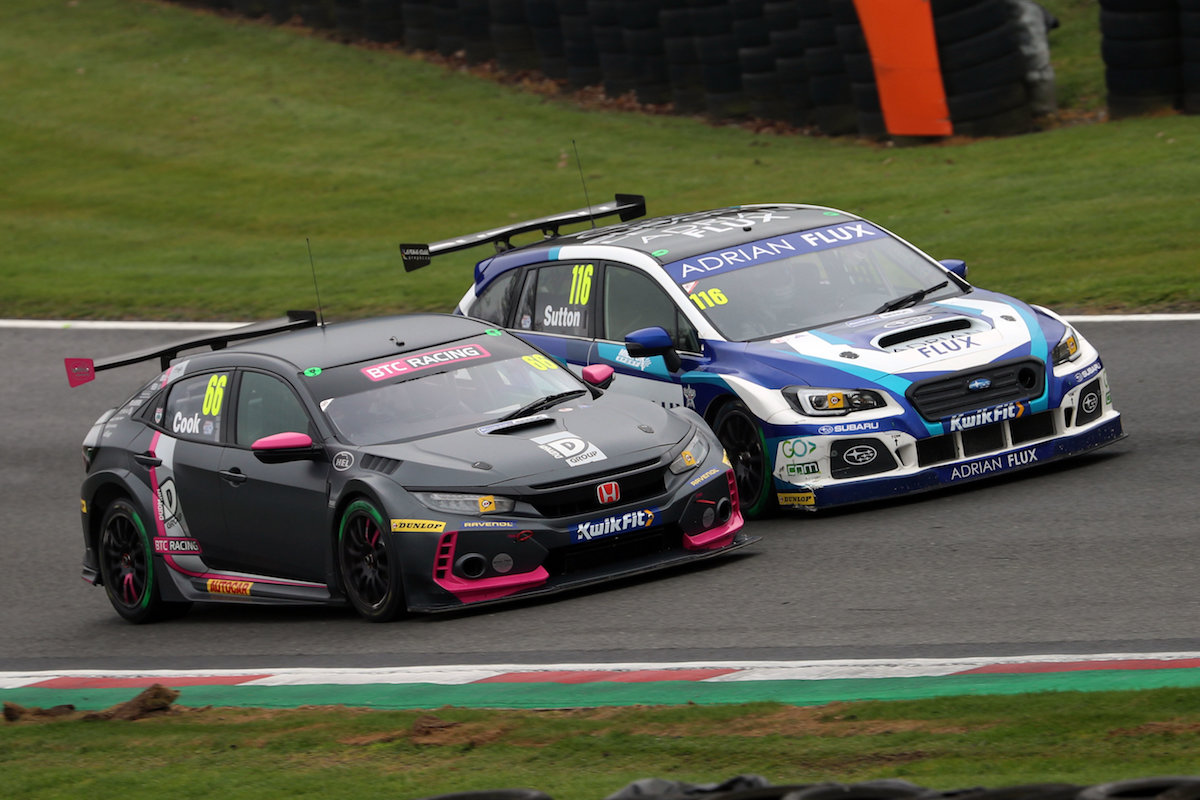 Running its new Honda Civic Type Rs for the first time, the Brackley-based team showed impressive pace throughout the weekend around the tight Brands Hatch Indy circuit, with new signing Josh Cook powering his way to the first win of the year, and team-mate Chris Smiley fighting back from an unfortunate start to race day to salvage some well-earned points.

Josh had lost valuable track time to electrical gremlins on Saturday that resulted in him missing a large chunk of second practice, and also limited him to fewer laps than most of his rivals in qualifying.

Despite that, Josh secured tenth place on the grid for the opening race of the weekend, which would be held in challenging conditions on Sunday morning thanks to early morning rain and light showers.

The weather left teams with a tough decision to make on which tyres to run, with Josh electing to stick with slick tyres as the drivers ahead all gambled on the rain intensifying.

Although he slipped back to 17th in the early stages as focused on staying out of trouble, Josh was soon the quickest man on track and by lap six, had stormed into the top ten. Jumping from fifth to first on lap nine, Josh built a lead out front and was able to control the race through to the finish to secure a win on his debut with the team.

The second race saw Josh starting on pole, but now carrying additional success ballast and running on the soft compound Dunlop tyre. Although he would lead the early stages, the combination of the weight and the tyres left him powerless to defend against the cars behind and he slipped back seventh place at the finish.

Fifth on the grid for the final race of the weekend, Josh ran inside the top six throughout and benefitted from an issue for Honda’s Matt Neal on the final lap to pick up a fourth place finish that capped a strong first weekend with the team.

Team-mate Chris had started race one directly behind Josh in twelfth but took a different approach with the tyres as he followed the front-runners in the field by going with wet weather rubber.

Whilst that allowed the Northern Irishman to fight his way into the top ten in the early laps, he found himself slipping back down the order as the quicker slick-shod cars worked their way forwards, and would ultimately retire when contact on the exit of Graham Hill Bend saw him go off into the barriers.

With the team repairing the damage to his Honda for race two, Chris took up his place at the back of the field for race two, with a capacity grid of 30 cars ahead but the less favourable soft tyres fitted to the car.

Despite that, he was able to work his way forwards to 20th place at the finish, which left him in a solid position to try and fight for points from the final race of the weekend.

Finally in a position to benefit from the pace in the car, Chris saved the best for last with a fine drive through the field to seventh place, allowing him to salvage nine points from a challenging race day.

Josh Cook, #66 said:
“We’ve been struggling with some gremlins in the car this weekend that we’re still trying to fix completely, so to come away from Brands Hatch with a race win and the championship lead is fantastic. The whole team has put a huge amount of work in, and this is a great way to reward them for their efforts, and for the faith they have put in me to give me the drive.

“If everyone had been on the same tyre in race one, it might have been a different story, but that wasn’t a gamble as far as I was concerned. To me, it was a dry circuit and the only question was why everyone ahead went with wets. Okay so we had a little bit of luck on our side with that one, but we’ve shown strong pace throughout all three races and have come away with two more good results and a strong haul of points.

“We have some things we need to sort out ahead of Donington Park but it’ll be nice to go there as the points leader, even though it’ll be tough at the same time with the ballast. We’ll have to see how we go.”

Chris Smiley, #22 said:
“I feel really positive after this weekend as we have genuine pace in the car. Race one was one of those where there were faster cars coming through and we just caught up in an incident that wasn’t our fault but it happens, and hopefully that’s our bad luck out of the way.

“I feel we did well to make up ten places on the soft tyre in race two because the performance of them dropped off a cliff like it did for everyone else, and to then come from 20th to finish seventh in race three was great. You don’t make up 13 places like that around a circuit like Brands Hatch unless you have a good car.

“Okay so I might have only scored nine points from the weekend, but I’d rather go away from here with that score and knowing I have a good car, than a good haul of points from making the right tyre choice in race one and a car that was nowhere in races two and three.

“We’ve only had four days with the FK8 and we’re in a good place with it already, and I can go to Donington Park – which is one of my favourite circuits – in confident mood.”

Bert Taylor, team principal, said:
“Our expectations at Brands Hatch were to try and qualify inside the top ten and to then race there, as we have only had limited time with the cars so far.

“To now be heading home leading all four championships is beyond our wildest dreams and is a great reward for the drivers and all the team for a job well done.”