The BTC Racing team battled back from a tough start to race day to secure a second podium finish of the Kwik Fit British Touring Car Championship season at Donington Park. 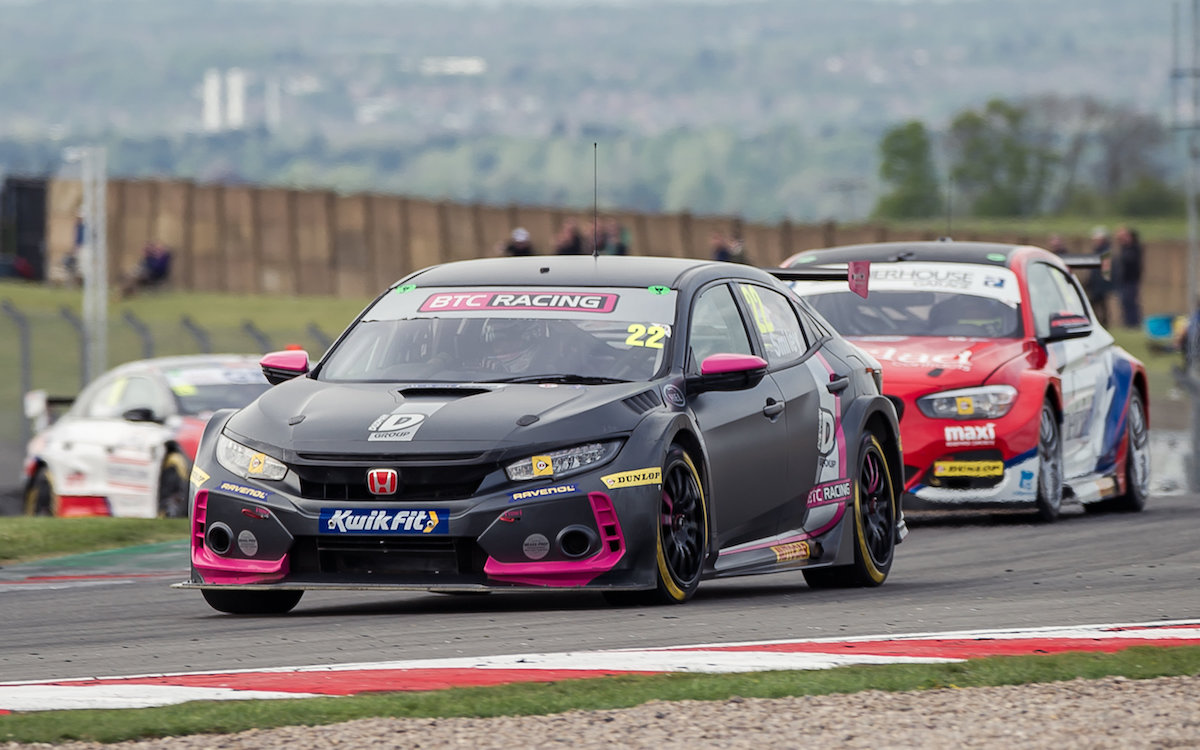 The Brackley-based team headed into the weekend on the back of a fine season opener at Brands Hatch, where Josh Cook secured victory in the first outing for the team’s new FK8 Honda Civic Type R to snare the early championship lead.

After two practice sessions held in damp conditions, qualifying provided Josh and team-mate Chris Smiley with their first chance to hit the circuit in dry conditions, with Josh securing second on the grid despite the additional ballast on his car and Chris lining up in fourth.

Slipping back to third at the start behind the fast-starting Subaru of Ash Sutton, Josh ran third through the early stages of race one before contact from the older Honda of Sam Tordoff at the final corner damaged the rear suspension and caused a puncture that resulted in him being forced into the pits. Rejoining a lap down, Josh took the flag outside the points in 24th place.

Chris ran fifth in the early phase of the race in the sister car and would spend the entire 19 laps fighting hard in a train of cars dicing for fourth spot, eventually crossing the line in seventh overall as the best placed of the Independent drivers.

Sadly for Chris, any chance he had of building on that result in race two would end in dramatic fashion when a heavy hit from the VW of Jack Goff going into Redgate on the twelfth lap broke the rear suspension on the Civic, leading to him spinning off into the gravel as he headed down the Craner Curves.

It left Josh to fly the flag for the team, which he did in fine style with a battling drive through the field from 24th to eighth to bag solid points to add to his tally.

From third on the reverse grid for race three, Josh dropped a place at the start but fought his way back into the top three by the mid-way stage after getting ahead of the Audi of Jake Hill and secured his second podium finish of the campaign – and a second Independents’ class win of the day for the team.

As had been the case with Josh in race two, Chris was able to make the most of the pace in the Honda to fight his way forwards from 25th on the grid to eleventh place by the finish, although the Northern Irishman was once again left to wonder what might have been.

At the end of the second weekend of the season, Josh lies second in the overall championship standings with Chris in 17th, with the duo third and eighth in the Independents Trophy.

BTC Racing now sits second in the Teams’ Championship – a single point behind the works BMW team – but has retained its advantage in the Independents’ Teams Championship.

Chris Smiley (Carrickfergus), #22 Honda Civic Type R, said:
“It’s turned out to be one of those frustrating weekends for me. Whilst we haven’t quite had the ultimate pace, we know we were quick enough to run inside the top five or six, but ultimately don’t have a lot to show for our efforts.

“An Indy win in race one was a solid start, but race two turned out to be a complete write off after contact that wasn’t needed, and it meant race three became a recovery drive. While it’s good to have got to eleventh from where I started, we should have been right up there fighting for the podium with Josh.

“I don’t feel we have got the results we deserved again this weekend but we can go to Thruxton knowing we have a good car based on the results of the recent test we had there. Hopefully we can have some good weather conditions and I’m looking forward to it.”

Josh Cook (Bath), #66 Honda Civic Type R, said:
“After qualifying, we were expecting big things but then after race one, it quickly looked like it was going to become a bad weekend. Whilst I respect the decision of the stewards to call it a racing incident, it was frustrating that it happened and although I’m annoyed, I can understand Sam’s view in going for the move.

“However, if our bad weekends can end up like today and we can still come away with a podium then I can’t complain too much. It’s mega to have fought back in the way that we have, and to finish up with third in the final race is credit to the team for the hard work that they’ve put in again. It’s a long championship and we’re still well placed in the standings heading to Thruxton.

“The fact that we’ve tested there already will help us, as will the fact we’ve run with ballast. As my home circuit, I’m optimistic that we can go there and have a good weekend.”

Bert Taylor, team principal, said:
“Both Josh and Chris have had some bad luck this weekend that has affected their results but as a team, we’re pleased that we’ve picked up another two Independent wins and an overall podium in only our second weekend with the new car.

“It means we’re still right in the mix in the points but we have to keep working hard because there’s still a long way to go and there will be plenty of twists before the season comes to an end.

“Like we did at Brands Hatch, we’ve shown this weekend that we have good pace and that is something we can look to build on when we go to Thruxton. We’ve already had a solid test there and it means we can look to hit the ground running when we arrive in a few weeks time.”