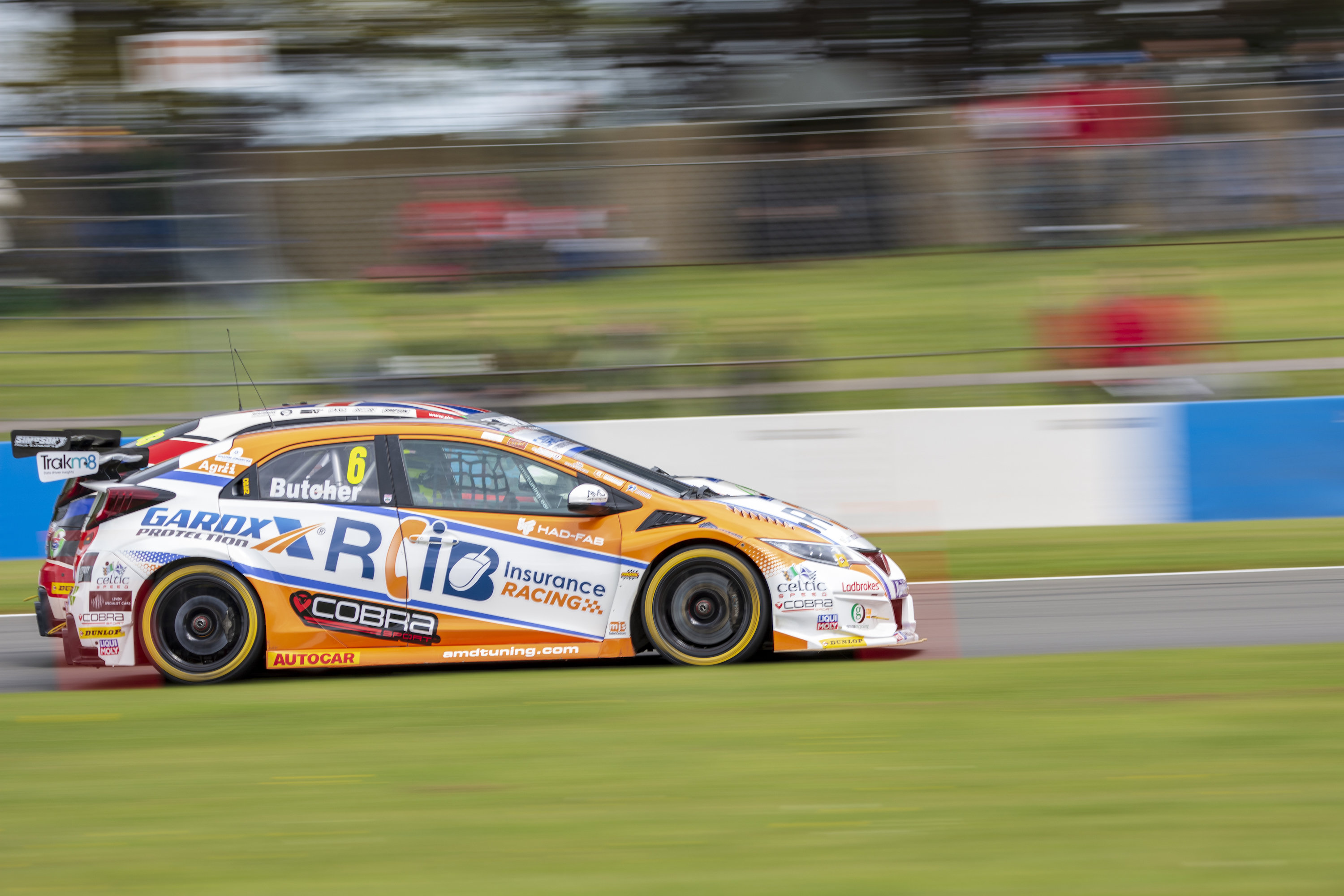 The West Thurrock-based team headed to the East Midlands circuit on a high after a breakthrough victory at Brands Hatch earlier in the month, with drivers Sam Tordoff and Rory Butcher confident about fighting at the sharp end of the field.

Leeds racer Sam had endured a weekend to forget at Brands Hatch on his first outing in the team’s Honda Civic Type R, but looked well set to get his championship challenge underway after qualifying in a solid fifth place.

Running fourth in the early stages of the race, Sam battled his way up into the podium places after an early safety car period, but damage sustained in a clash with Josh Cook would then lead to him suffering a spin going into the final chicane.

Dropping down outside the points, Sam nursed the car to the finish to take 13th place and then went into race two focused on pushing back into the top ten.

Up into ninth within three laps of the start, Sam’s race was going to plan early on but a hit from behind going into the Craner Curves on lap seven resulted in a high speed spin across the grass that dropped him down towards the rear of the field. From there, Sam drove well to recover to 14th, although it was very much a case of what might have been.

Fife ace Rory was keen to build on his Brands Hatch victory but was left on the back foot in qualifying when he was unable to get a clear lap in the changeable conditions and was left down in 19th place on the grid.

The Scot fought his way forwards to eleventh in the opening race of the weekend and then set what would prove the be the fastest race lap of the weekend in race two with a storming run through to fifth.

Sixth on the grid for race three thanks to the reverse grid draw, Rory produced a battling drive on the less favourable hard tyre to secure fourth place and heads away from the weekend sitting just six points off the championship lead.

Rory Butcher, #6 Cobra Sport AmD with AutoAid/RCIB Insurance Racing Honda Civic Type R, said:
“Qualifying was so disappointing as we didn’t get a decent lap in the conditions and it made race day tough. But I tried to make progress in each race and it worked. We got the fastest lap on the medium tyre and had the quickest car on the hard tyre in race three, which is really good.

“Before race three I thought it would be nice to try and get my tally for the day up to 30 points and that’s what we did. That is the goal for each race meeting and I’m always looking at the bigger picture and the season as a whole.

“The car was strong in the Thruxton test we did recently and whilst a little bit of ballast will hit us going there, we’ll be in the mix. It isn’t about fighting for pole, it’s about challenging for the points on race day that will be key later in the year.”

Sam Tordoff, #600 Cobra Sport AmD with AutoAid/RCIB Insurance Racing Honda Civic Type R, said:
“Unfortunately this weekend has been yet another disaster for me. We had another strong qualifying performance to take P5 on Saturday, and I thought our luck had finally turned. However, the contact in race one eventually broke the car and spat me off, and it set the tone for race two. We were coming through nicely and then got turfed off again, which ruined my race.

“Being on the hard tyre in race three, we tried a few radical things thinking ahead to Thruxton. It seemed like a good time to experiment given that the rest of the day hadn’t gone to plan but sadly it didn’t work out, although we did set the fastest lap on the hard tyre.

“We just have to keep trying and keep plugging away because our time will come.”

Shaun Hollamby, Cobra Sport AmD with AutoAid/RCIB Insurance Racing team principal, said:
“It’s been a bit of a mixed bag again this weekend. Rory has done a great job and has driven really well and it means he is right up there in the points after two rounds – and there on merit because he’s picked up some strong results and been right on the pace.

“Sam has been unfortunate with contact in two of the races and it means that he hasn’t picked up the results that he deserves once again this weekend.

“Clearly we have a fast race car and we can go to Thruxton feeling positive that both drivers will be able to push for the podium.”