The Richardson Racing team battled back from a tough opening encounter of the weekend to secure a second victory of the Michelin Ginetta Junior Championship season at Donington Park. 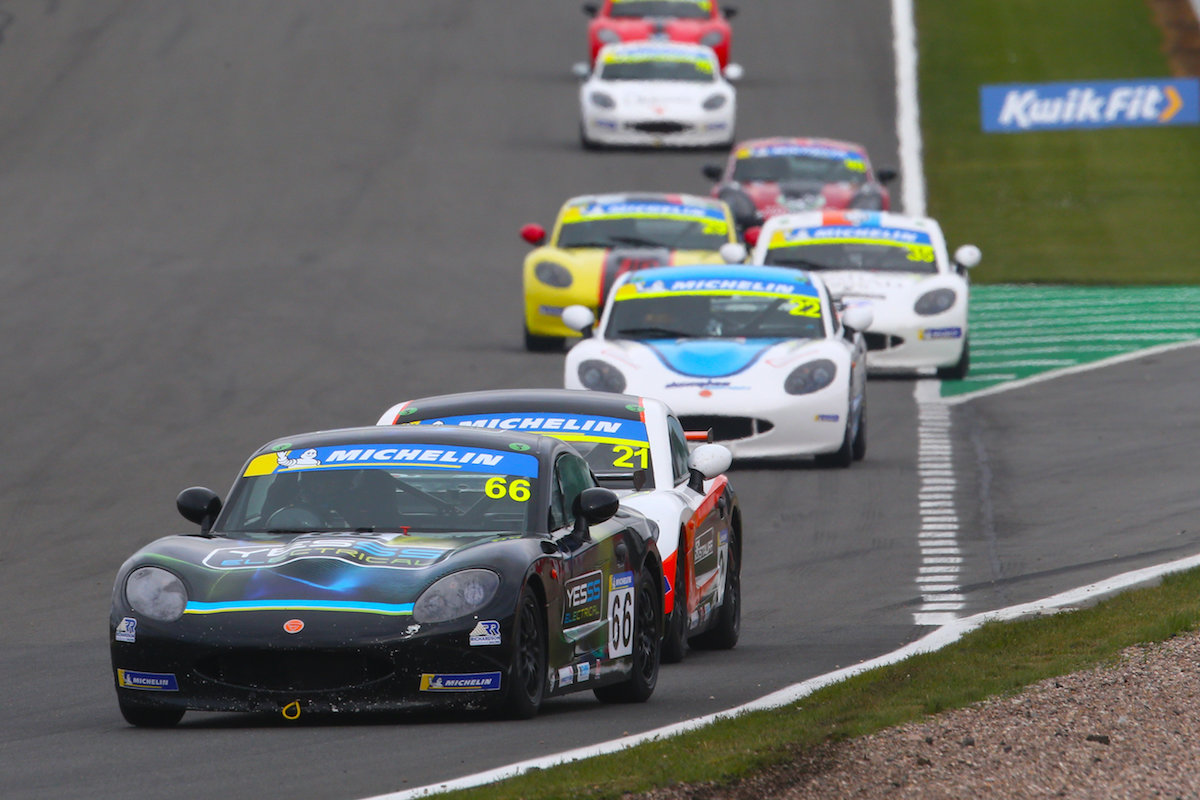 The Corby-based team made the trip to the East Midlands circuit confident about running at the sharp end of the grid, with drivers James Taylor, Will Martin and Casper Stevenson having all shown solid pace in the season opener at Brands Hatch.

Qualifying in drizzly conditions on Saturday saw James leading the team’s challenge in fifth place, with Will lining up in ninth and Casper in twelfth – leaving all three well placed to fight for top ten finishes from the three races.

The opening race would prove to be a challenge however, with a technical issue preventing James and Will from taking their place on the grid. When the race was red-flagged after an incident at Redgate, the team was able to get James’ car started so he could take the restart from the pitlane, although Will would be left watching from the sidelines.

Despite starting off the back of the field, James battledr hard to make his way through the pack and crossed the line having climbed all the way up to fifth spot, inheriting an additional place afterwards when Roman Bilinski was excluded.

Casper meanwhile produced a measured drive to avoid the incident at the initial start and fought his way through to take the flag in eighth; once again inheriting a place post-race.

With all three cars now running without issues, race two on Sunday morning would prove to be a strong one for all three drivers.

From the second row of the grid, James battled hard with Bilinksi and James Hedley in the early stages and managed to jump ahead into the lead when the pair clashed – remaining out front to the finish despite Hedley’s best efforts to fight back on the run to the line.

Having dropped back to tenth place on the opening lap, Will fought his way back through to fifth place by the finish whilst an impressive run from Casper saw him sit inside the top ten throughout. Eventually crossing the line in seventh place, Casper earned a place on the podium as second best of the rookie drivers.

The final race resulted in a second podium finish of the weekend for James, who found himself embroiled in a race-long battle for the runner-up slot before eventually crossing the line in third place.

Will and Casper both ran strongly in the early stages but would get caught up in an incident on lap five when Theo Edgerton suffered a spin at Redgate.

Running in fifth place, Will was unable to avoid making contact with the spinning car, which resulted in him dropping back to ninth place with a damaged car of his own. Despite that, he was able to salvage a seventh place finish.

Casper would also lose out as he was forced to take to the grass to avoid the chaos ahead and dropped down well outside the top ten, but the rookie recovered well to cross the line in eleventh; making up two additional places due to penalties handed out elsewhere. As in race two, he secured second place amongst the rookie drivers.

After two rounds of the season, James sits second in the championship standings with Casper in ninth overall and Will in tenth.

Will Martin, #10 (Battle, East Sussex), said
“I had hoped to qualify a bit higher up the order and unfortunately race one proved to be a write off for me, which was a shame. I had to just put that to the back of my mind and reset for Sunday.

“Fifth in race two was a solid result and in the final race I think a podium finish could have been possible if I hadn’t picked up a bit of damage. However, I showed how competitive I am again and picked up some decent points from a difficult starting point.

“I just need a little bit of luck on my side and I’m confident that we can be strong at Thruxton next time out.”

Casper Stevenson, #25 (London), said
“Qualifying in the mid-pack made the first race of the weekend tough, but I was pleased with the way it went and to come through to seventh was a solid start. To then repeat that in race two and pick up second amongst the rookies was great and it was more solid points as well.

“It was good to end up with another rookie podium in race three but it’s a shame that I couldn’t get higher overall. There was a lot of contact and bumping in the pack, and I was one of those to lose out.

“Having battled back from the DNF at Brands Hatch to take three top ten finishes, it would be nice to push for some overall silverware at Thruxton.”

James Taylor, #66 (Rotherham, Yorkshire), said
“The red flag in race one really saved us because without that, I don’t think we’d have got out on track. We could easily have ended up with a zero score from that race and after a DNF at Brands Hatch, we can’t really afford another one so early in the season.

“Recovering those points was really important and then race two couldn’t have really gone much better. When I had the chance to get into the lead, I made sure I took it, and then held off Hedley at the end.

“Finishing off with a podium in race three is a good result and more solid points. It was a tough race but there is still a long way to go and we’re well placed in the standings. Thruxton next time out will be exciting and hopefully we can have a good showing there.”