The Trade Price Cars Racing team battled back from a difficult start to race day to secure a brace of top ten finishes from the second meeting of the Kwik Fit British Touring Car Championship season. 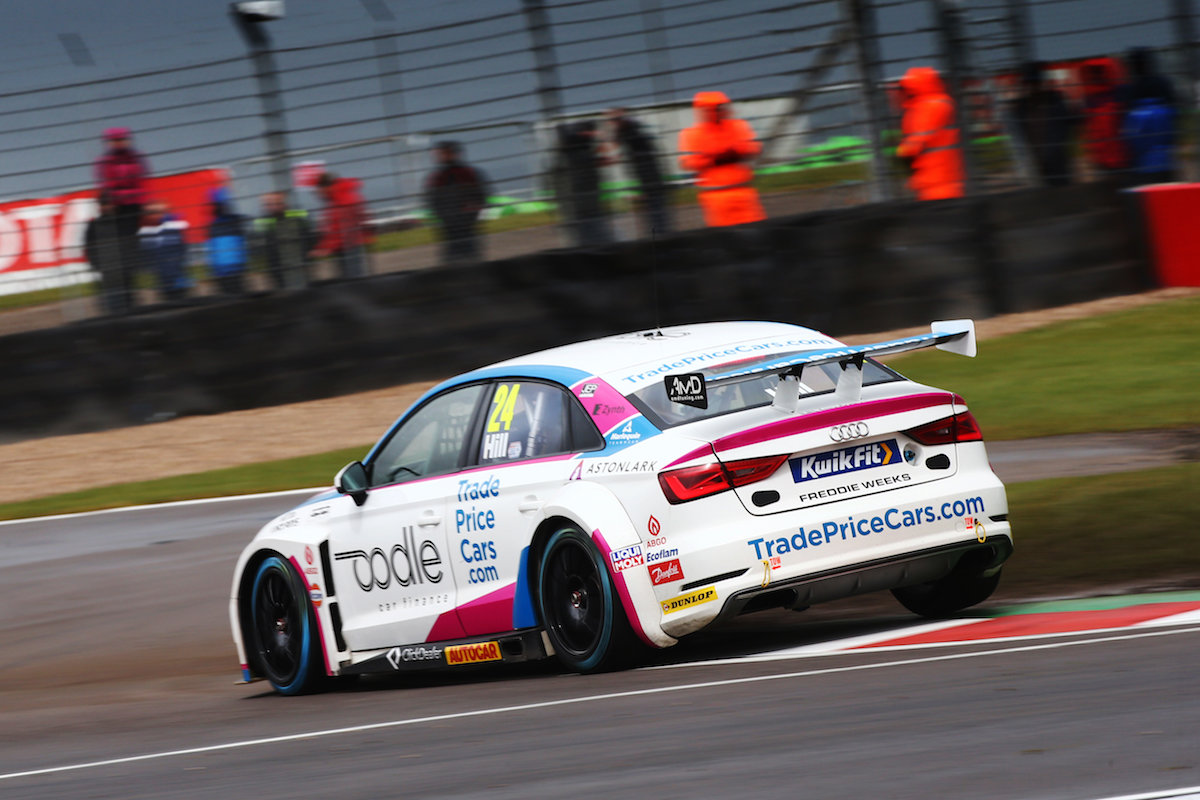 The team went into the weekend hoping to challenge inside the top ten after a solid start to the campaign at Brands Hatch resulted in a podium finish for rising star Jake Hill.

Jake would start the weekend on the back foot when he was only able to qualify 22nd on the grid for race one, with mixed weather conditions and multiple red flags blighting his challenge during the session.

More favourable conditions greeted the team on race day, but there would be further misfortune in race one when Jake was forced to retire on the opening lap when he was collected by the spinning Ford Focus of Ollie Jackson – having already been forced onto the grass to avoid a multi-car incident at the Old Hairpin.

The team worked hard to repair his damaged Audi S3 in time for race two, and Jake repaid them in fine style with a storming drive through the field from dead last to ninth at the finish.

That resulted in a front row start for race three thanks to the reverse grid draw, with Jake running in the top three for the opening ten laps despite being on the less favourable hard tyre.

Whilst he would slip back to sixth at the finish, the points scored on race day allowed Jake to retain a place in the top eight of the overall standings whilst he also sits fifth in the Independents’ Trophy.

Former F1 racer Mark Blundell also endured a tough qualifying session after an incident in the closing stages resulted in him lining up 29th on the grid for the opening race.

Lacking track time in dry conditions, Mark headed into race day keen to add to his touring car experience and fought with the MG of Sam Osborne throughout race one before finishing in 23rd place.

Race two would end early for the Le Mans 24 Hours winner when he was caught out by Osborne braking early for the final chicane, with the resultant contact seeing him spin off into the gravel.

At the back of the grid for race three, Mark stayed out of trouble to end his weekend with a 22nd place finish having just missed out on getting ahead of the works Subaru of Senna Proctor on the run to the line.

The team now heads to Thruxton in Hampshire next month for the third round of the season.

Mark Blundell, #8 Trade Price Cars Racing Audi S3, said:
“It’s been a tough weekend and a real mixed bag for me on track. I’ve picked up another two finishes and it’s just a shame about what happened in the second race.

“The big positive to take away from this weekend is that we are starting to get a better understanding of what we need to do to the car to get it better suited to me and my driving style.

“That is something for us to work with as we move forwards and hopefully we can make some progress when we get to Thruxton.”

Jake Hill, #24 Trade Price Cars Racing Audi S3, said:
“Race three turned out to be a really good end to what looked like it was going to be a difficult day. Qualifying didn’t go to plan in the conditions and what happened in the first race put us even more on the back foot.

“Credit to the team as they did a great job to get the car fixed for race two and it was absolutely mega. To come from the back of the grid to finish ninth was way more than I expected and meant we were able to benefit from the reverse grid for race three.

“To get a top six on the hard tyre was a great way to end the weekend and means we’ve still picked up some solid points for the Independents’ championship.”