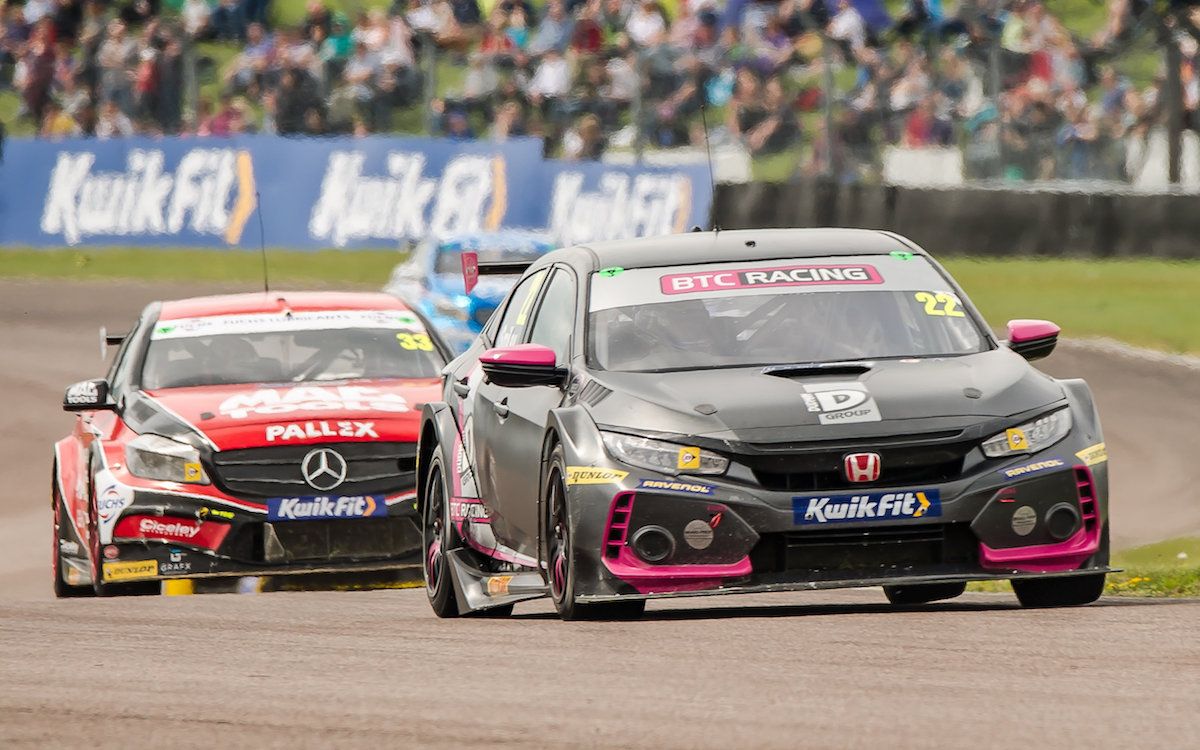 The Brackley-based team headed for the high-speed Hampshire circuit in confident mood, with a strong test at the fastest venue on the calendar the previous month having seen drivers Chris Smiley and Josh Cook right on the pace at the wheel of their Honda Civic Type Rs.

Qualifying saw the pair set times just outside the top ten, with Josh securing eleventh place on the grid for the opening 16 lap encounter and Chris just behind in twelfth.

A traditionally chaotic opening lap in race one saw Josh slip back to twelfth spot, with Chris running in 16th having been clipped by Aiden Moffat’s Mercedes at the final chicane.

With overtaking opportunities proving to be at a premium around the high-speed Hampshire circuit, Josh would spend the entire race fighting to find away ahead of the Audi of Jake Hill and would eventually cross the line just outside the top ten in eleventh.

Chris meanwhile found himself embroiled in a multi-car battle in the midfield and having got up into the points scoring positions, managed to find away of the older Honda of Matt Simpson three laps from the end to secure 14th place.

As had been the case earlier in the day, both drivers would find it tough to make up places in race two, with Josh the better placed of the two as he managed to break into the top ten thanks to a late move on former team-mate Ash Sutton.

Chris however found himself in the wars when contact with the Ford Focus of Ollie Jackson at the Chicane on the second lap saw him drop down to 23rd place, with all hopes of a points finish seemingly gone.

The Northern Irishman showed the pace in the Honda to fight back through the field and picked up a single point for 15th at the finish.

The final race of the weekend saw Josh starting from the front row of the grid as a result of the reverse grid draw and, with the team having made a number of changes to his car, wasted little time in jumping into the lead with a move on Sutton into the complex.

Despite two safety car periods and with drizzle in the air, Josh was able to control the race from the front to secure his second win of the campaign and maintain a top three position in the championship standings.

From 15th on the grid for race three, Chris lost two places on the opening lap when forced to take avoiding action when two cars clashed ahead at the complex, but recovered well to end the weekend just shy of the top ten in eleventh spot.

Chris Smiley, #22 BTC Racing Honda Civic Type R, said:
“It’s been a tough weekend for us as we came here to the test and I was right at the top of the times, but then we just couldn’t get the car to work when we returned. We made changes across race day and we found something that allowed me to start pushing forwards.

“I think people need to remember that this is only our third weekend with the car and we are still learning. We just need to get further up the grid in qualifying as it gets dicey in the pack when you find yourself in the midfield.

“It’s so tight that it can hard to make progress, but I showed you can overtake in the second and third races, and now I just need the rub of the green a little bit. I’m sure my time will come.”

Josh Cook, #66 BTC Racing Honda Civic Type R, said:
“Race one and two were tough as we weren’t comfortable with where the car was and we made some changes for race three and took a bit of a gamble. It worked well and we took a leap forward with the car and put some good points on the board. We had expected the car to be quick in race two without the weight but we struggled and credit to the guys for the work they put in ahead of race three as they did a great job.

“I wouldn’t say we had been slow in race one and two, but didn’t have the strengths we needed in certain areas. We found those for race three and the points we scored could prove to be vital. We need to make sure we remain in the mix when it gets towards the business end of the year.”

Bert Taylor, BTC Racing team principal, said:
“After the first two races, it looked like this was going to be a real weekend to forget for us as we just didn’t have the pace that we had showed when we tested at Thruxton last month.

“The team worked hard to make changes across race day and we took a bit of a gamble ahead of race three that worked and to come away with a win is great – we’ve really been able to salvage something with that one.

“We have learned a lot this weekend that we can use when we return later in the year and hopefully we can be on the pace from the outset in August.”