Having spent twelve months working hard in the gym to lose weight and improve fitness, I wanted to set myself a challenge for 2019 – something that would push me to my limits and show how successful my work in the gym had been… 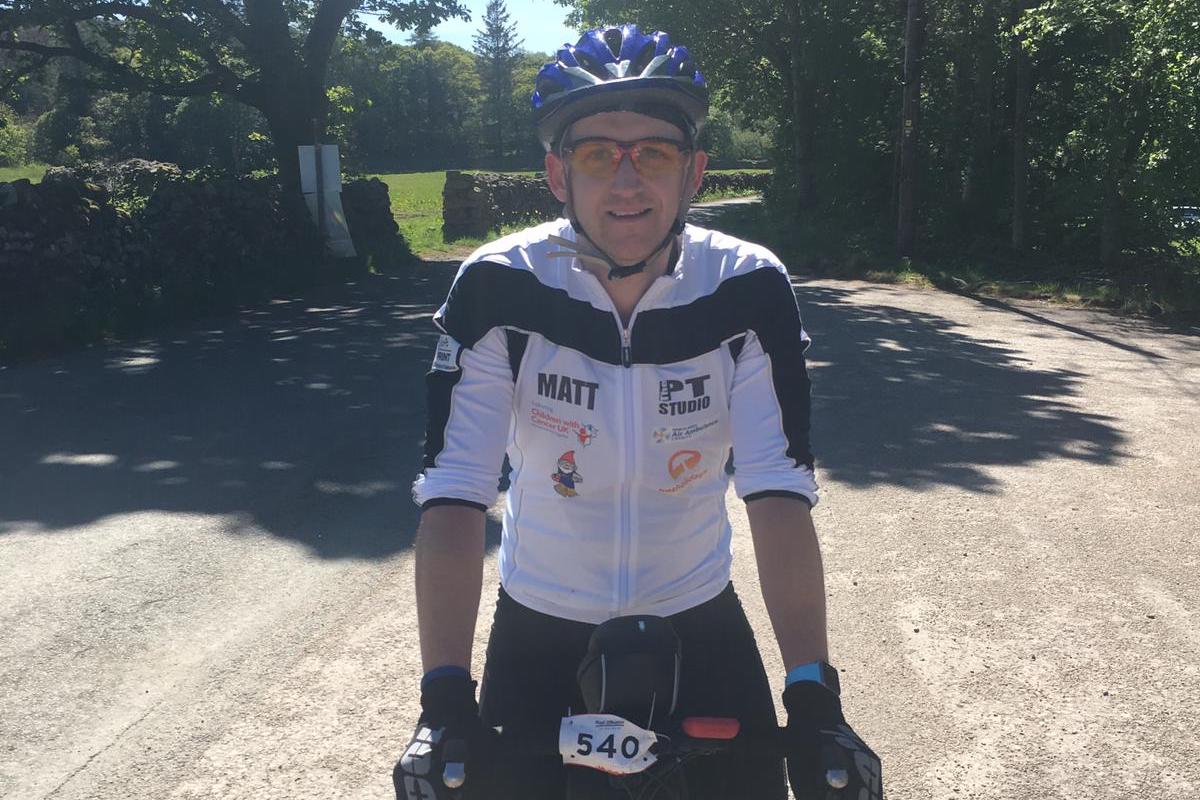 Discounting a marathon as I’ve done one of those already, I instead elected to try and secure an entry for the Fred Whitton Challenge, an event widely regarded as the most difficult cycling sportive in the country.

Like the London Marathon, the Fred – which celebrated its 20th anniversary this year – operates a ballot system for entries because of the number of people who want to take part, so the first challenge was to actually get in.

Once I received the email telling me that I’d been successful in securing a place – and had explained to the wife exactly what it was I’d decided to do – it was time to start planning for what was to come.

Given that I’d not actually been on my bike for around six months, I knew that a lot of hard work lay ahead if I was to stand any chance to making it round the course. But how exactly do you train for an event like the Fred, with its fearsome climbs and tricky descents?

Truth be told, unless you live in the Lake District, I don’t think you can – so instead I focused on trying to do as much hill work as I could fit in around work and my other commitments, meaning I would become friendly with the likes of Shaley Brow, Parbold Hill and Rivington.

Having suffered with chronic knee problems for more than 20 years, there was also plenty of leg work in the gym to give myself the best chance of success.

Whilst I know that I could have done more training given more time, the date soon arrived and my trusty Merlin X2.0 Cyclocross bike – fitted with new gearing and some road tyres – was thrown in the back of the car to head for the Lakes.

Having signed on on Saturday afternoon, a trip up Holbeck Lane – part of the route I’d not actually travelled before – left me wondering what the hell I was doing as I headed back to my overnight base in Haverthwaite to rest ahead of the next day.

An early morning start saw me back in Grasmere ready to join the early starters as the clock ticked round to 06:00 – giving me the most time possible to make it past the cut-off points.

As we rolled out of Grasmere to head towards Ambleside, the temperature was only just above freezing and the mist was rising from Rydal Water – so the early miles were just about keeping the legs moving to warm up ready for the first climb of the day.

Swinging left onto Holbeck Lane, it was a case of dropping down the gears and plodding along to make it to the top. As others came flying past on their way up, it would have been easy to try (and fail) to keep up but I’d already taken the approach that when it came to the uphill bits, I was much better off being the tortoise than even attempting to be the hare.

The road up to Troutbeck had some short, sharp climbs that were made more difficult by the low temperatures, which made it difficult to catch my breath, before the drop down to join the A592 – more commonly known as the Kirkstone Pass.

Aside from one moment when the chain jumped off and required a quick stop, the climb up Kirkstone Pass wasn’t actually that bad and it was a case of settling into a rhythm on the run to the summit before the first descent down to Ullswater.

The descent wasn’t too bad and the run down to the edge of the lake provided the first chance to make up some time. Pacing myself up Matterdale End, a quick descent down to the A66 then led along to Keswick before heading into Borrowdale.

The road towards the first BIG climb of the day isn’t the best and hitting it at the same time as one of the local buses wasn’t ideal, but soon it was time to tackle Honister Pass.

Even knowing what was to come, it was a shock as the road turned to the left heading out of Seatoller and went straight up at a gradient of well over 20% – more than I’d tackled in training.

Waiting for the bus driver to sort himself out at the bottom meant I hit Honister in a large group of riders and whilst I did my best to keep going, I joined those unclipping to walk the most challenging part of the climb. Once over the cattle grid part way up, it was back in the saddle for the ride to the summit before the tricky downhill run to the first feed station.

I had been prepared to miss Buttermere if the clock was against me, but with time on my side, I stopped to refuel – which in hindsight was a mistake. I knew from training that if I stopped, my legs would need a bit of riding to get going again, but that’s not a luxury you get as once you leave the food stop, you are straight onto Newlands Pass.

As I cycled up the first steep section of the climb, I knew my legs weren’t ready for what they were being asked to do and would unclip again before the summit. Had I ridden through, I’m pretty sure that I’d have been able to tackle the climb – or at least a bit more of it – but I’d gone into the event with the mindset that if I needed to talk, I’d walk.

The quick run down to Braithwaite saw me reach the first cut-off with more than an hour to spare before hitting Whinlatter Pass. This was one part of the route that I was determined to ride regardless of what my legs told me. The support from people watching on as I made my way up fantastic and it’s no exaggeration to say that as I rolled over the summit to start the descent down to Lowton, there was a genuine feeling of emotion as the cow bells clattered and people cheered the riders on.

I’d thought that the back part of the course would provide me with a chance to recover a little but there is no such thing as flat in the Lake District and there were plenty of small climbs that drained a little bit more energy from the legs. A high five from my folks at the top of one of these ‘small climbs’ – Fangs Brow – was a good boost before the ride up over to Ennerdale Bridge and Cold Fell.

Although not the trickiest climb, Cold Fell was one of those that just keeps on going and even when you think you’re at the top, you suddenly see there is a little bit more ahead of you. Once at the summit, a quick descent led down to Calder Bridge and the second food station, where there was time to grab a decent amount of food and a coffee with time in hand before the second cut off.

From here, there was only one thought in my mind and that was that the hardest part was still to come.

Having had chance to see the kids outside the station at Eskdale, I took it easy before arriving at the bottom of Hardknott Pass, one of the steepest climbs in the UK and the most fearsome section of the ride.

I was under no illusions about the fact that I wouldn’t be riding to the summit of this one and having managed the bottom part of the climb, was soon back on foot through the opening switchbacks. Riding the middle section before the climb suddenly reared up again for the next switchbacks, I was left to simply marvel at those who were able to stay on their bikes to push towards the top.

To ride up Hardknott from a standing start would be one thing, but to get up with nearly 100 miles already in the leg was an astonishing achievement – and I certainly salute those who made it.

Another fearsome descent down the other side was followed by a steady ride through the valley to the bottom of Wrynose, which wasn’t half a bad as what had come before. It was still far from easy and towards the top, the gradient got just that bit too much and there was a small walk before climbing back on for the trip over the summit.

Dropping down the other side, I was greeted by the sight of medics attending to someone who had come off the road – providing a stark reminder of how dangerous the roads can be if you don’t pay attention.

Swinging left to head for Blea Tarn – an addition that is completely un-needed when your legs are crying enough – then led into the final run to the finish, heading back down towards Ambleside and then along to Grasmere.

Turning into the field more than eleven hours after I’d departed, there was massive sense of achievement that I’d completed the Fred at the first attempt despite the fact – as mentioned – that I’d probably not trained as much as I could have done.

So what do I take away from the Fred?

Well for a start, I’ve rediscovered a love for cycling that I’d forgotten I had. Whilst I’ve enjoyed my work in the gym, there is something different about hitting the road and going off exploring – and it’s also been something that has been less painful for my knees than impact work in the gym.

I’m also hugely impressed with the way in which the event itself was run. From arriving in Grasmere on Saturday afternoon to register for the start right through to leaving the car park after the finish on the Sunday evening, everything was well organised and went like clock work.

The marshals out on the course did a fantastic job and should be commended for giving up their time to allow the event to pass off without a problem.

I think, although I’m not sure for certain, that my fundraising efforts will have earned me a complimentary place in the event for 2020 with around £900 of my current total going to MacMillan and the North West Air Ambulance; two of the three charities that are supported by the Fred.

The other £900 is on its way to Children with Cancer UK – meaning three charities have benefitted from my efforts.

I certainly want to keep on cycling and am already looking into upgrading my bike for something that is more road focused, although that will largely be down to finding someone who wants to take my current bike off my hands.

All being well, the weekend of the Fred in 2020 will be free from work commitments and I can return once again for a second go – and with nearly twelve months to prepare, I can look to ‘enjoy’ it in a different way and work towards completing the course without needing to walk.

The fundraising page for my Fred Whitton ride is still live and if you wish to donate, you can do by Clicking Here.