Rising star Luke Browning battled hard on track to secure a brace of points finishes from what would prove to be a challenging fourth round of the British F4 Championship Certified by FIA – powered by Ford EcoBoost season at Croft. 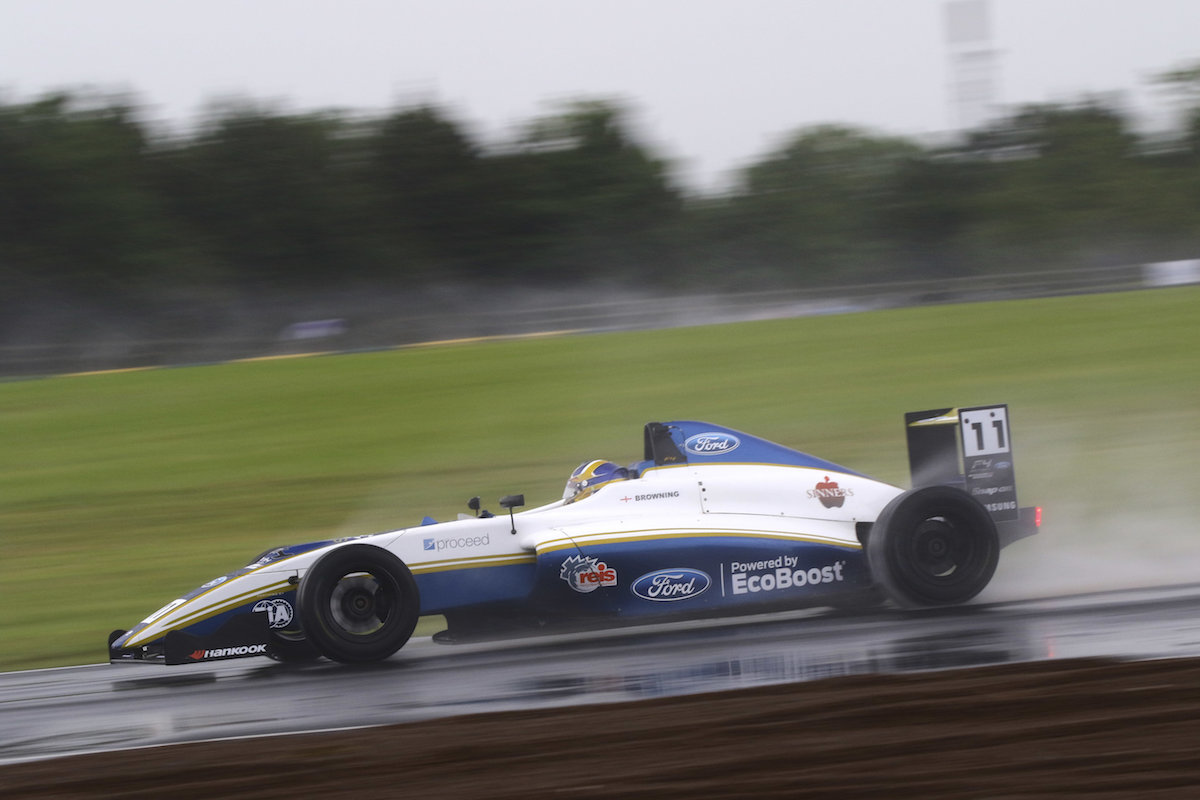 The Corby-based team headed for the North Yorkshire circuit looking to challenge for a fifth podium of the season, with Cheshire racer Luke having adapted quickly to single-seater machinery following his graduation from the Ginetta Junior Championship.

Qualifying would prove to be a challenging affair for Luke however, and he found himself tenth on the grid for the opening race of the weekend having struggled to get a clear lap.

Luke would run inside the top ten throughout the opening race and was able to lap almost as quickly as he had done in qualifying, battling hard with the Carlin car of Joe Turney for much of the 20 minute encounter.

Unfortunately, a post-race time penalty for being out of position at the start dropped Luke outside the points scoring places and left him classified in twelfth spot.

Lining up in the same position on the grid for race two, Luke was hopeful of fighting forwards up the order after rain started to fall, with the teenager renowned for being an expert in wet conditions.

Sadly for Luke, the conditions would simply prove to be too wet for the race to be run safely, with the decision taken to halt proceedings after a single lap and cancel the race.

Improved conditions would greet the drivers for race three on Sunday, with Luke battling from ninth on the grid to take seventh and more vital points for his championship tally, meaning he will go to his home circuit of Oulton Park in two weeks sitting fifth in the championship standings.

“This weekend is one that I think we can learn from as a team,” he said. “Things just didn’t go our way and we didn’t realise our potential in qualifying, which left us on the back foot going into the races.

“The was the deciding factor as far as Croft goes to be honest, and it meant we couldn’t show the same level of performance that we had in the first three rounds; it was just difficult in the middle of the pack.

“Our chance to shine would have been in race two as we were quick in the wet during Friday testing, but the decision to cancel the race meant we couldn’t make the most of it, which was just unfortunate.

“There is no doubt that this has been a tough weekend and we’ve struggled a bit, but that just means we’ll work even harder ahead of Oulton Park to change things around and come out fighting for my home round. It can’t come soon enough.”