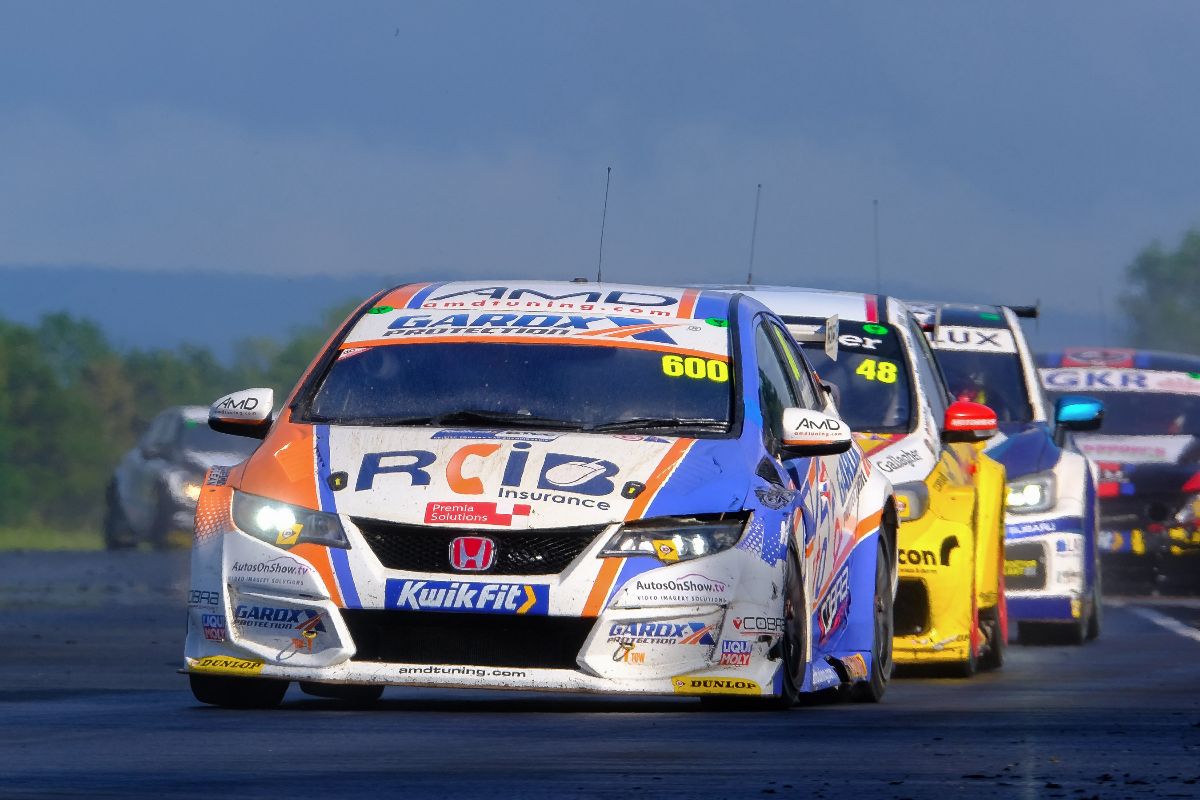 The West Thurrock-based team headed for North Yorkshire in confident mood after Rory Butcher and Sam Tordoff both took to the podium at Thruxton in the previous round, with hopes high of more success on track.

Despite showing well in practice with additional ballast on his car, Rory was left with work to do on race day after a heavy accident in qualifying before he’d been able to set a timed lap.

Fine work from the team to repair his damaged Honda Civic Type R allowed the Fife racer to start the opening race from 29th place, and he fought hard on track despite being on the less favourable hard tyre to work his way up to 18th place.

Battling towards the top ten in race two, Rory was well placed to get into a position to potentially benefit from the reverse grid draw before contact from the Subaru of Senna Proctor forced him wide at the hairpin.

The end result was a 14th place finish, but a storming drive in a wet final race saw Rory fight hard with the rapid BMWs of Colin Turkington and Andrew Jordan to eventually cross the line in seventh.

It leaves the Scot sixth in the championship standings at the end of the weekend and second in the Independents’ Trophy.

Team-mate Sam was also left with work to do on race day after a number of red flags and traffic prevented him from setting a representative time.

From 26th on the grid, Sam showed the pace in the Honda to race forwards into the points before contact from Proctor at the hairpin dropped him back down the pack; with a further trip across the grass leading to a pit stop that saw him cross the line 23rd.

Fighting back to 15th place in race two, Sam would end the weekend with 13th in race three to secure two points finishes, although the Leeds racer was left to wonder what might have been.

Sam ends the weekend 17th in the overall standings and seventh in the Independents’ Trophy.

Shaun Hollamby, Cobra Sport AmD with AutoAid/RCIB Insurance Racing team principal, said:
“Croft was always going to be a case of damage limitation and that definitely proved to be the case!

“Qualifying was hampered by multiple red flags and the rain and it didn’t go our way, with the accident for Rory and Sam being delayed in getting out for his final chance to set a lap-time.

“The real highlight for me from the weekend was the way in which the whole team worked hard in challenging conditions, and also the way that Rory took on the BMWs of Andrew Jordan and Colin Turkington in race three.

“To see both drivers score points rewarded the team for their hard work and we’re looking forward to Oulton Park where we’re confident that the Cobra Sport AmD with AutoAid/RCIB Insurance Racing Hondas will shine!”

Rory Butcher, #6 Cobra Sport AmD with AutoAid/RCIB Insurance Racing Honda Civic Type R, said:
“I have to say a huge thank you to the team for getting the car fixed for race day after what happened in qualifying as it was a big hit.

“To be honest, I hoped we could have taken more from race day but the tyre selections worked against us and when we got rid of the weight after race one, there wasn’t really anyone on the hard tyre in race two. Getting punted off the road also didn’t help….

“Had the final race been dry then I think we could have really pushed up the order because most of the grid would have been on the hard tyre, but we still did well on the wets and to make up seven spots and fight with Turkington and Jordan shows how competitive we are.

“It’s nice to pushing guys like that as a circuit where the BMW is so strong and hopefully at Oulton Park we’ll have a bit more luck.”

Sam Tordoff, #600 Cobra Sport AmD with AutoAid/RCIB Insurance Racing Honda Civic Type R, said:
“When you don’t qualify well, it can be hard to come back from it and sadly that proved to be the case for us this weekend.

“Despite that, I think we were on for a decent result in race one before I got forced off, which undid all of the good work that we had done to that point.

“It meant race two was another recovery drive and then we missed out on the one bit of luck we could have had in race three when everyone else was going to run the hard tyre and it rained.

“It’s been difficult again for me this weekend and hopefully my luck will turn at Oulton Park.”