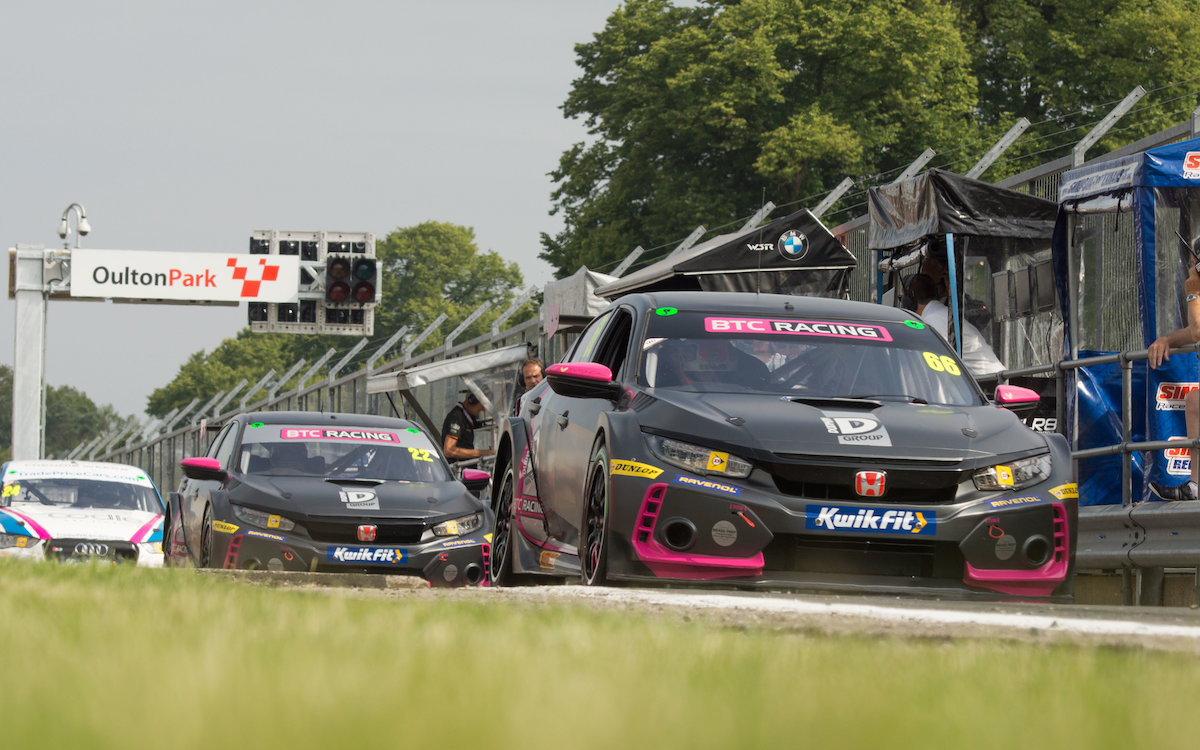 The Brackley-based team made the trip to Cheshire with drivers Chris Smiley and Josh Cook hopeful of fighting for some solid results to take into the traditional summer break.

A challenging Saturday for the team would leave both drivers on the back foot going into race day, with an issue with the steering on his car leaving Chris in eleventh place on the timing sheets, and Josh down in 22nd having battled an issue that resulted in the team fitting a new turbo to his Honda Civic Type R overnight.

With Chris carrying a five place grid penalty into the weekend, the Northern Irishman started race one from 16th place on the grid and would slip back to 18th in the opening laps as drivers battled for position in the midfield pack.

By lap three, Josh had worked his way up to 19th place and would close onto the rear of Chris’ car as the pair set about fighting their way towards the points.

Incidents for Matt Neal and Adam Morgan allowed the battling duo to climb up to 16th and 17th, with Josh briefly getting ahead before Chris took the place back with two laps to go; the pair just missing out on adding to their points tally.

Hopes were high of pushing for points in the second race of the weekend but a dramatic opening lap saw Chris unfortunately forced to retire after contact at the Island Hairpin.

Josh was caught up in the same incident but escaped unscathed to end the first lap running in 14th spot, and he battled his way forwards to tenth at the finish – a result that looked set to leave him third on the grid for race three thanks to the reverse grid draw.

A five place grid penalty for Josh for the race two incident instead saw him line up for the start in eight spot, with Chris lining up at the back of the field after the team worked hard to repair his damaged car in time for the start.

Having lost a place on the opening lap, Josh would survive a chaotic encounter to bring his car home to the finish in seventh spot, which would later become sixth when Jake Hill’s Audi was excluded.

Chris however would be unable to build on a solid start to the race when an alternator issue resulted in him being forced to retire to the pits having lost power steering.

At the half way stage of the season, Josh sits third in the overall championship standings and second in the Independents’ title race, with Chris 17th overall and ninth best Independent.

Chris Smiley (Carrickfergus), #22 BTC Racing Honda Civic Type R, said:
“I feel I’ve been strong all weekend but have just had the worst luck you could imagine. I’m disappointed with the results, but at the same time, I’m not disappointed with the way I’ve driven as there was nothing I could have done differently to change anything.

“I’ve given it my all behind the wheel but we had a few little issues that were down to things that you wouldn’t expect to happen, and that were no fault of me or the team that set us back.

“Without the issue in qualifying, we’d have been starting in a much better position for race one, and we could have scored some good points in race two without the incident on the opening lap.

“The team did a great job to repair the car after race two and we were on a mission until an issue with the alternator meant I lost power steering and I was forced to retire as it just wasn’t safe to continue. It was a shame because the car felt awesome and the team had worked miracles to get it out for the start.

“We have a base set-up that works on the car and we are very close to being in the sweet spot with it. I’m looking forward to the two-day test at Snetterton to try some changes and do some of the work that we can’t do on a race weekend, and then we can come out fighting in the second half of the season.”

Josh Cook (Bath), #66 BTC Racing Honda Civic Type R, said:
“Qualifying was always going to be tough at Oulton Park with the weight and when you add in a small problem with the car, we had work to do on race day.

“The first two races were all about trying to make up places which is what we did, although it was unfortunate with what happened on the opening lap of race two and with the grid penalty I picked up as a result.

“It meant we couldn’t benefit from the reverse grid as much as I hoped, but to come away from race three with a top six finish and to retain third in the standings at the half way stage of the season is really good.

“So far this year, we’ve had some weekends where everything has just gone to plan and things have been easy, but a weekend like this where you have problems to deal with shows how good the team around you is.

“The guys did a fantastic job all weekend and worked late into the night on Saturday on both cars to sort out some issues for race day. They are the best team I’ve driven for in my touring car career to date, and having been competitive throughout the season so far, I’m hoping we can build on our results when the action resumes at Snetterton.”

Bert Taylor, BTC Racing team principal, said:
“It’s been a challenging weekend for us and neither driver has been able to really get the results that their pace deserved. The whole team has worked hard to deal with everything that Oulton Park has thrown at us and I’m proud of the way that every single member of the team has performed.

“It’s been a good season so far for us with the FK8 but there is still a long way to go, and we’ll keep pushing hard for more silverware in the second half of the season.”