The Trade Price Cars Racing team secured a pair of top ten finishes as the Kwik Fit British Touring Car Championship season resumed at Snetterton, although it was a weekend that could have been even better… 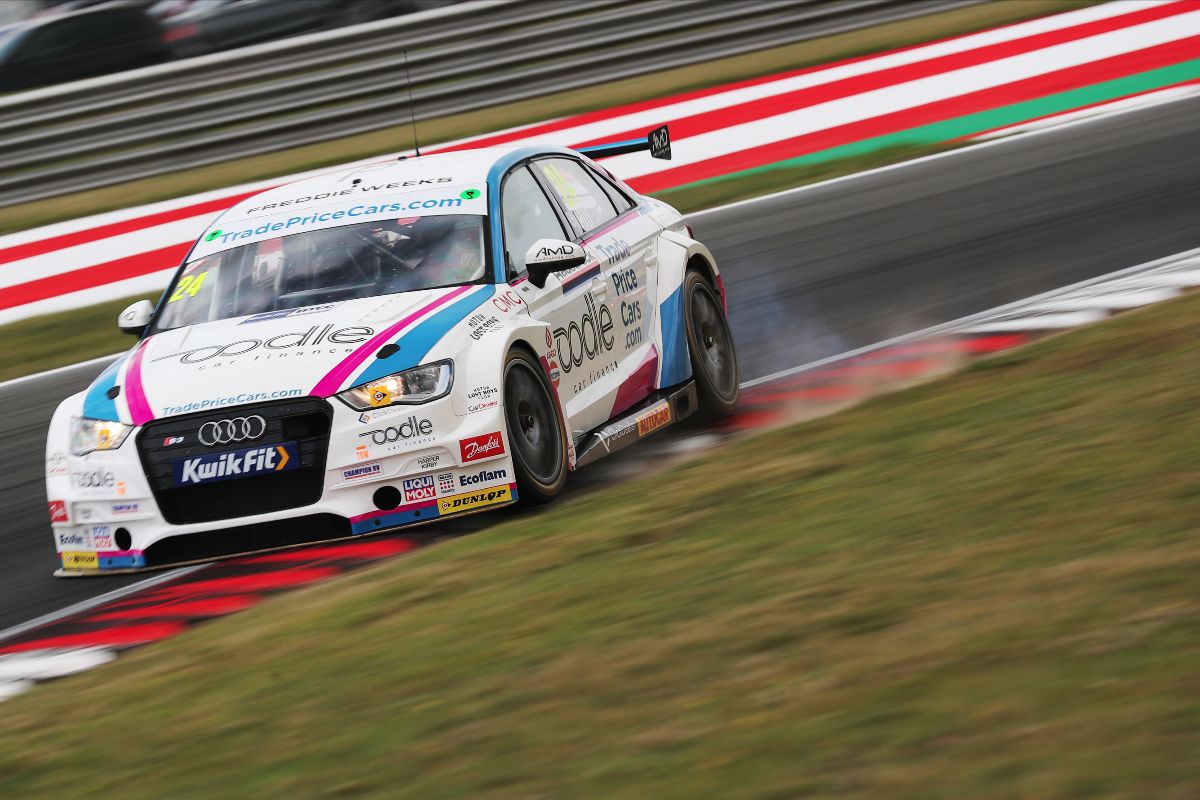 The team, run on behalf of the award-winning motor dealership by technical partners AmD Tuning, headed into the weekend looking to maintain the strong form it had shown during the season to date.

Both Jake Hill and Mark Blundell were also keen to build on the progress made during a two-day tyre test at the Norfolk circuit over the summer break, which had given the team the opportunity to work on a series of tweaks to the Audi S3.

Having shown strong pace through free practice, rising star Jake qualified 14th on the grid for the opening race of the weekend – with a red flag stoppage and then traffic affecting his chances of securing a top ten grid slot.

Deciding to run the hard tyre in race one, Jake battled his way forwards to tenth at the finish, ensuring he was able to end the race as the best placed driver running the least favoured tyre option.

With the medium compound tyre fitted for race two – which marked his 100th start in the series – Jake repeated the result with another tenth place finish, leaving him in a strong position going into race three.

Now with the soft tyre fitted to the Audi, Jake was quickly making up places when the final race kicked off, fighting his way forwards from tenth into the top five before the end of lap one.

Jake’s forward charge continued as he battled his way into the podium places but his hopes of battling for an astonishing race win would end in heartbreaking fashion when a gearbox issue forced him into retirement.

Former F1 racer Mark qualified in 26th spot for the opening race, where he joined Jake in electing to run the hard tyre at the first available opportunity.

Whilst he would climb as high as 20th through the opening half of the race, Mark would eventually take the flag in 23rd spot – but aware that his best chance of a strong result was still to come.

Running the soft tyre in race two, Mark put in a battling performance to work his forwards through the pack after early race contact dropped him down to 27th place. A number of solid overtaking moves saw him go close to a fourth top 20 finish of the season before he crossed the line in 21st.

Unfortunately, Mark would also fail to make it to the finish of race three after contact on track resulted in him being forced into retirement.

Mark Blundell, #8 Trade Price Cars Racing Audi S3, said:
“We are leaving Snetterton with a feeling of what might have been. On the surface, it might not look that great but we all know as a team that the performance is improving – we just need to tap into it at the key moments across the weekend which we haven’t been able to do so far this season. This is not for a lack of effort and I’m sure we will all get a slice of luck soon as I genuinely think we deserve it.

“A clutch issue at the start of race three meant I was swallowed up by all those behind and from that point on, you’re in the middle of all the chaos but it was disappointing to finish the weekend with a DNF.

“I am feeling more and more at home in the car and there were plenty of occasions this weekend where the car felt as good as it has done. We need to take the positives from that and build on it. It was a real shame for Jake in race three too as he looked set for another great result. A big well done must go to our sister team at AmD Tuning and Rory for his win.”

Jake Hill, #24 Trade Price Cars Racing Audi S3, said:
“It’s a case of mixed emotions after the weekend because we showed really strong pace in the car but missed out on what could have been a brilliant result in race three.

“Making up places on the hard tyre in race one was a good way to start things as there was plenty of pressure from some quick guys behind, and I was also happy with how race two panned out. To get a top ten in my 100th race was great, and a good way to celebrate the milestone.

“We’d seen in the first two races how quick the soft tyre was so I was confident about race three, although I didn’t expect to make up places as quickly as we did! The car was absolutely mega and I have no doubt that we could have had a podium finish at the very least from the way things were going.

“To then hit trouble was gutting, but we can head away from Snetterton with our heads held high as we showed again that we can mix it at the sharp end of the grid. We’ll work hard to try and maintain that at Thruxton next time out.”