Rising star Harry King battled back from a double dose of disappointment to add to his win tally as the Millers Oils Ginetta GT4 Supercup season resumed at Thruxton. 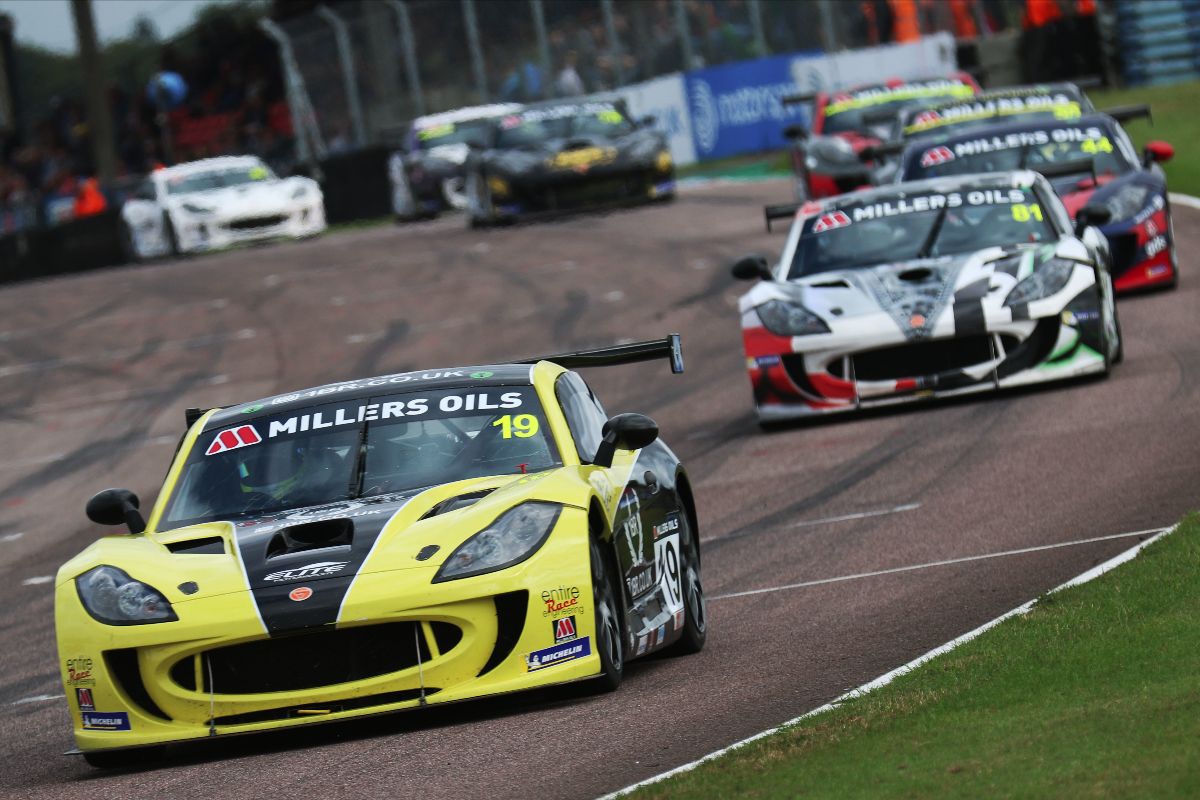 Harry headed to the fastest circuit on the calendar seeking to add to an impressive run of success that had seen him move into the points lead in the highly-competitive one-make series.

With the series having not visited Thruxton since 2015, the weekend marked the first time that Harry had competed at the Hampshire circuit in his Ginetta G55, with his previous outing having come whilst still racing in the Ginetta Junior Championship back in 2017.

Despite that, the teenager was up to speed from the moment he hit the track and followed up a solid showing in mixed conditions during Friday testing with an impressive pole position; his second of the season in his Elite Motorsport-run car.

It looked like Harry would convert that pole position into a sixth win of the year when the lights went out for race one, as he maintained his place at the head of the pack ahead of title rival Will Burns.

However, Harry then suffered the heartache of a puncture on the final lap that dropped him down outside the points and left him to start race two on Sunday from the back of the Pro grid.

Unfortunately for Harry, his misfortune would carry into the second race, with driveshaft failure at the end of the green flag lap leading to him retiring before the action even got underway.

That meant Harry once again lined up at the back of the Pro class field for the final race of the weekend, but he was quickly making up places when the lights went out, climbing up into fourth place by the end of lap three and then moving into second on lap six when he got ahead of both Reece Somerfield and Will Burns at the Complex.

Chasing down race leader Carlito Miracco, Harry battled into P1 with four laps to go and then eased away at the front to secure his sixth win of the season by more than three seconds.

Despite the tough nature of the weekend, Harry leaves Thruxton just 13 points away from the championship lead heading to Knockhill; a circuit where he secured victory whilst competing in the Ginetta Junior Championship back in 2017.

“It looked like this could prove to be a real weekend to forget after the first two races, so to come back and win race three is great and has allowed us to really salvage something from it,” he said.

“What happened in races one and two was really frustrating but credit to the team because they gave me a fantastic car for race three and I was able to make the most of it.

“I think we can go to Knockhill confident about trying to reclaim the championship lead as the circuit is one where I have gone well in Juniors and that suits my driving style.

“I’m confident we can go to Scotland and be strong.”