Third win of the year for BTC Racing at Thruxton

The BTC Racing team was able to celebrate a third win of the Kwik Fit British Touring Car Championship season after another strong weekend on track at Thruxton. 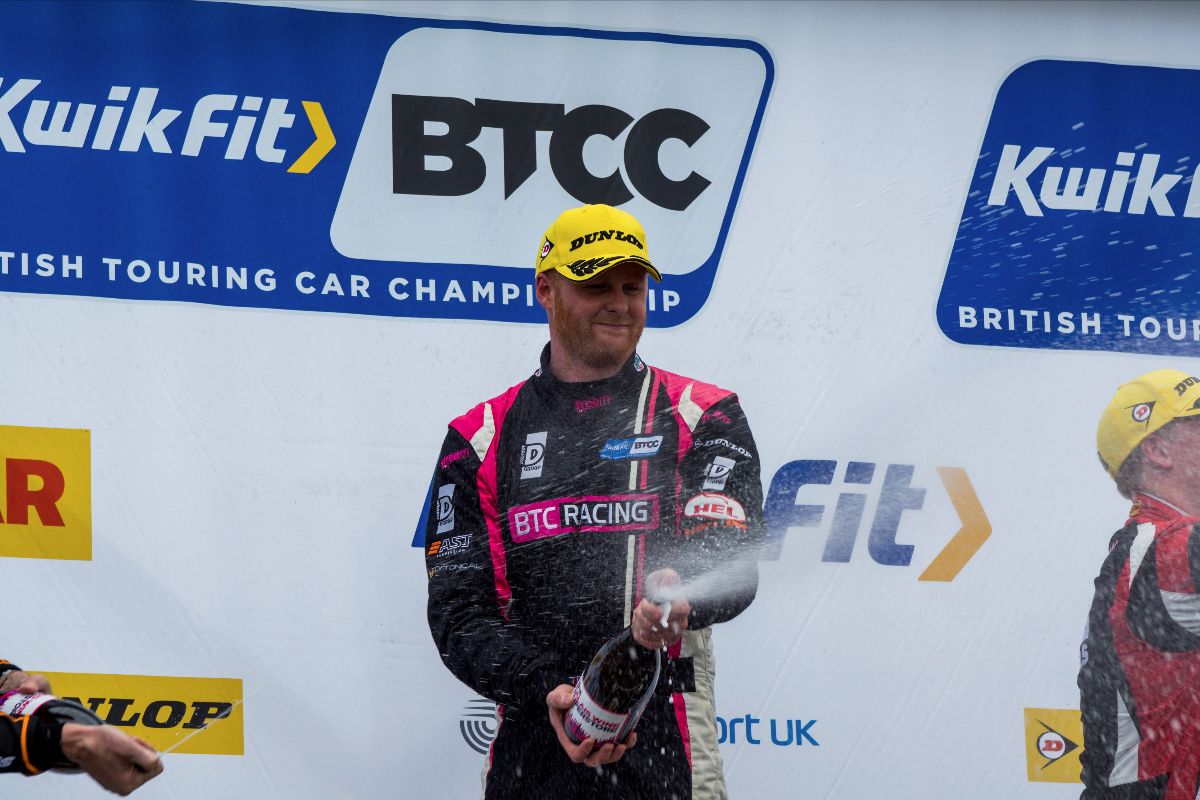 The Brackley-based team returned to the high-speed Hampshire circuit – where it had secured victory back in May – optimistic about running at the sharp end of the grid, with drivers Josh Cook and Chris Smiley confident about their chances of a strong haul of points.

A solid performance in qualifying saw both of the Honda Civic Type Rs qualify inside the top ten, with Josh securing fifth place and Chris posting the ninth best time – leaving both well placed going into race day.

When the lights went out in race one, Josh was able to maintain his position through the opening lap and then moved up into fourth at the end of lap two when Jason Plato was forced to serve a drive-through penalty. From there, the Bath-based racer held his place through to the finish for a solid points score.

Right in the heat of the midfield battle, Chris was able to climb up into eighth place by the end of the third lap but would lose out to the charging pair of Matt Neal and Ash Sutton in the final two laps to end the race in P10.

Race two would prove to be one to remember for Josh at his local circuit as he repeated his victory from the third round of the campaign back in May.

Getting ahead of Dan Cammish at the start, Cook then put pressure on Sam Tordoff and Adam Morgan before passing both in a fine move heading into the final chicane on lap four. Josh was then able to ease away from Morgan behind to secure his third victory of the campaign.

For Chris however there was disappointment after mid-race contact from the Vauxhall of Jason Plato at the complex resulted in a spin that dropped him down outside the points, with the Northern Irishman crossing the line in an unrepresentative 21st place.

Despite carrying maximum ballast on his car into race three, Josh ended the weekend with a strong sixth place finish, running well inside the top eight throughout and surviving a heavy downpour in the closing stages that made track conditions treacherous.

With the incident in race two having left Chris on the back foot, he headed into the final race of the weekend hoping to fight forwards into the points but the closely-matched nature of the pack meant he had to settle for 17th place at the finish.

At the end of the weekend, Josh now sits fourth in the overall standings and leads the Independents’ title race, with Chris sitting 17th overall and eighth amongst the Independents.

Chris Smiley (Carrickfergus), #22 BTC Racing Honda Civic Type R, said:
“It’s been a frustrating weekend and one that leaves me wondering what might have been. We did a solid job in qualifying to secure a place in the top ten for the opening race, and tenth was a decent enough start in race one as it was points on the board and left us well placed for races two and three.

“Unfortunately, race two ended my chances of adding to that which is a shame, because we had a good car and the fact that the FK8 has won two races this weekend shows we could have come away from here with three solid results.

“I’ll look to come back fighting at Knockhill next time out and try to secure the results our pace deserves.”

Josh Cook (Bath), #66 BTC Racing Honda Civic Type R, said:
“Consistent points was the aim this weekend so to come away from Thruxton with three top six finishes and a third win of the year is really pleasing.

“We had a strategy, and credit to the team for the hard work they have put in again that has helped us to pull together some more strong results. Even though I think we could have qualified higher, fourth was a solid start to race day and the win in race two was great; particularly with the move I had to make for the lead.

“We’ve always been quick without weight in the car but here we have also been fast when we’ve been carrying ballast, which is a big positive for us – particularly in race three when we picked up the best result of the weekend for anyone with maximum weight.

“The car is improving all the time and I’m hopeful that Knockhill will be a good circuit for us when we head there next month.”

Bert Taylor, BTC Racing team principal, said:
“It’s been a weekend of mixed fortunes for our drivers again but as a team, it’s great to come away from Thruxton with another victory. Josh has driven really well in all three races and his move for the lead in race two was great. He took full advantage of the opportunity that was there and fully deserved the win.

“Chris has also shown strong pace but yet again just didn’t have luck on his side. Without the contact in race two, he would have been able to fight for more points there, and that would have totally changed the way his weekend panned out.

“We head away from Thruxton right in the mix when it comes to the championship which is a fantastic achievement for us, and we have to make sure we work hard to keep the pressure on in the three rounds remaining.”