The Cobra Sport AmD with AutoAid/RCIB Insurance Racing team will hope to challenge towards the sharp end of the grid in difficult circumstances when the Kwik Fit British Touring Car Championship heads to Knockhill this weekend. 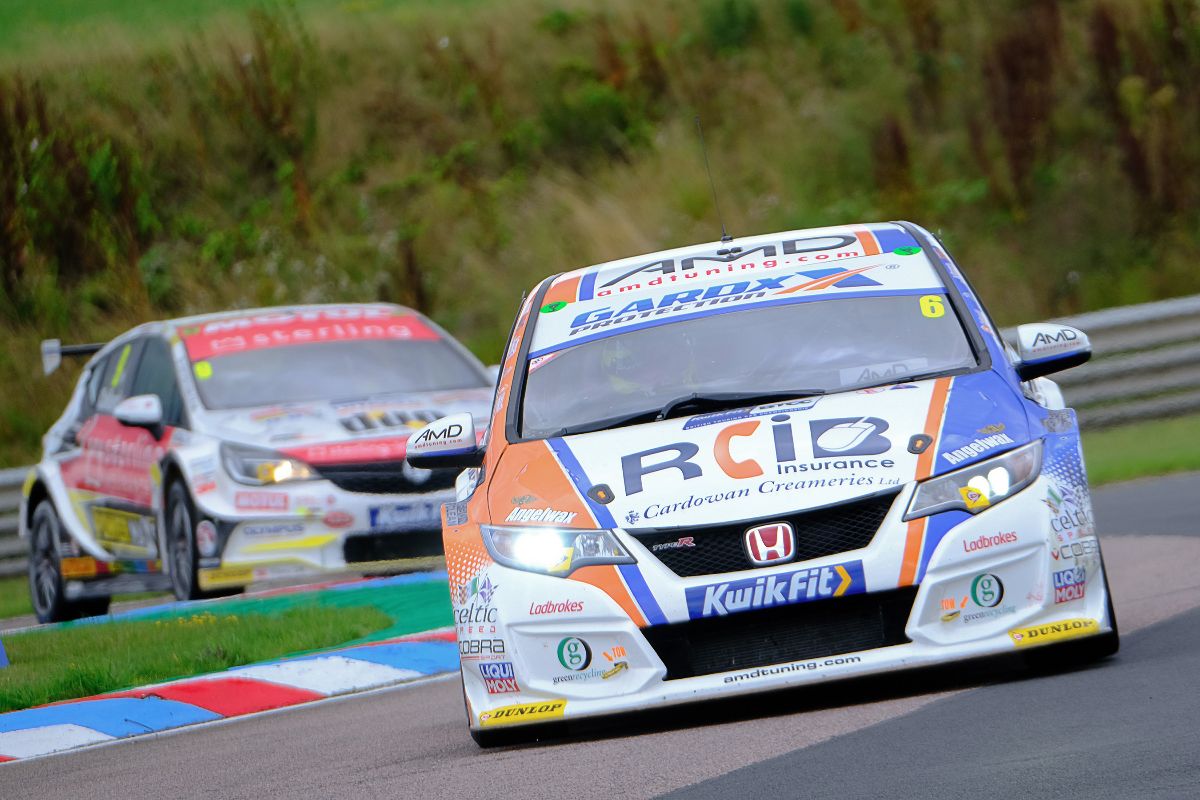 The West Thurrock-based team secured victory for the third time last time out at Thruxton after Sam Tordoff converted his second pole position of the year into a race one win, adding to the two victories secured by team-mate Rory Butcher earlier in the year.

Those wins, and four further podium finishes, mean the team now makes the long trip to Scotland sitting third in the teams standings, and with confidence high about a strong weekend at a circuit that should favour the Honda Civic Type R.

For Fife racer Rory, the Knockhill weekend will be the biggest of the season by far as the 32-year-old prepares to make his third BTCC appearance at the circuit owned by his father Derek.

Rory secured a hat-trick of top ten finishes last year at the wheel of an MG6 GT and will hope to use his local knowledge to return to the kind of form that has seen him secure 14 top ten finishes already this season.

Despite a difficult weekend at Thruxton that saw him log his first DNF of the year, the Scottish star remains well placed in the overall and Independents’ standings going into his home round, and also continues to head the Jack Sears Trophy for those drivers who hadn’t taken an overall podium before the season started.

Leeds-based team-mate Sam will not make the trip to Scotland however, after his new-born son Arlo passed away last weekend at just five days old.

The news has devastated the entire Cobra Sport AmD team, who will be racing this weekend at Knockhill with Sam, Georgina and the whole Tordoff family at the forefront of their minds.

With the blessing of the Tordoff family, double Clio Cup UK champion Mike Bushell will return to action in the second Honda this weekend, having spent the 2019 season in the role of lead engineer on Rory’s car.

The 30-year-old made his debut in the series at Knockhill back in 2013 in a one-off drive in a Chevrolet Cruze, and has since gone on to start 59 BTCC races – with a best finish of fifth at Brands Hatch last season.

Mike – who will run his regular #21 – will look to support Rory in his championship challenge, and also hope to battle for points in his first outing in the series since the 2018 season finale.

Shaun Hollamby, Cobra Sport AmD with AutoAid/RCIB Insurance Racing team principal, said:
“It goes without saying that our thoughts going into this weekend are very much with Sam, his wife Georgina, and the whole Tordoff family following their tragic news. There is nothing that is more important than family, and we will be racing this weekend in Arlo’s memory. Our heads are focused on the job at hand, but our hearts will very much be with Sam and his family.

“As Rory’s home event, this is a big weekend for the team and we’re expecting to get a lot of support from the local fans. Hopefully that support can help Rory to secure some strong results, and we’re sure that Mike will also do a good job in what are difficult circumstances for him to make his return to the series.”

Rory Butcher, #6 Cobra Sport AmD with AutoAid/RCIB Insurance Racing Honda Civic Type R, said:
“This will be the third time I’ve raced at home in the BTCC, but the first time where I have really had the package underneath me to fight towards the front of the grid.

“I know more than anyone that Knockhill is a very quirky circuit where you need a car that is working well underneath you. History says that we’ll have that with the Honda, but we can’t be complacent and know that we need to work hard on Saturday to qualify well and try to set ourselves up for a strong race day. Hopefully the support of the home fans will also help push me on to some good results.

“However, whilst there is the excitement that comes from my home event, I’ve been left deeply saddened by the news from Sam and Georgina in recent days. As a team, we are all very close and what has happened puts everything into perspective. This weekend, both Mike and I will be racing for them, and will be giving our all to do them proud.”

Mike Bushell, #21 Cobra Sport AmD with AutoAid/RCIB Insurance Racing Honda Civic Type R, said:
“Whilst it is lovely that the Tordoff family are trusting me to step into the car this weekend, it is absolutely devastating that the opportunity to get back behind the wheel has come along in these circumstances. I will be going out on track to race for Sam and his family 100 per cent this weekend, and any results are for them and for Arlo.

“I’m not going to set any expectations because I haven’t been in a BTCC car since February and I’ll also have to carry extra weight into the weekend; I just want to go out on track and do the most professional job that I can do in the circumstances. My priority is on Rory and his championship challenge and I’ll do all I can to help him, and it would be good if I could score some points for the team at the same time.

“I need to see how the car feels when we hit the track in FP1, and then just take each lap as it comes from there.”