The BTC Racing team enjoyed another strong weekend at Knockhill with a ninth podium finish of the season allowing it to maintain its bid for honours in the Kwik Fit British Touring Car Championship. 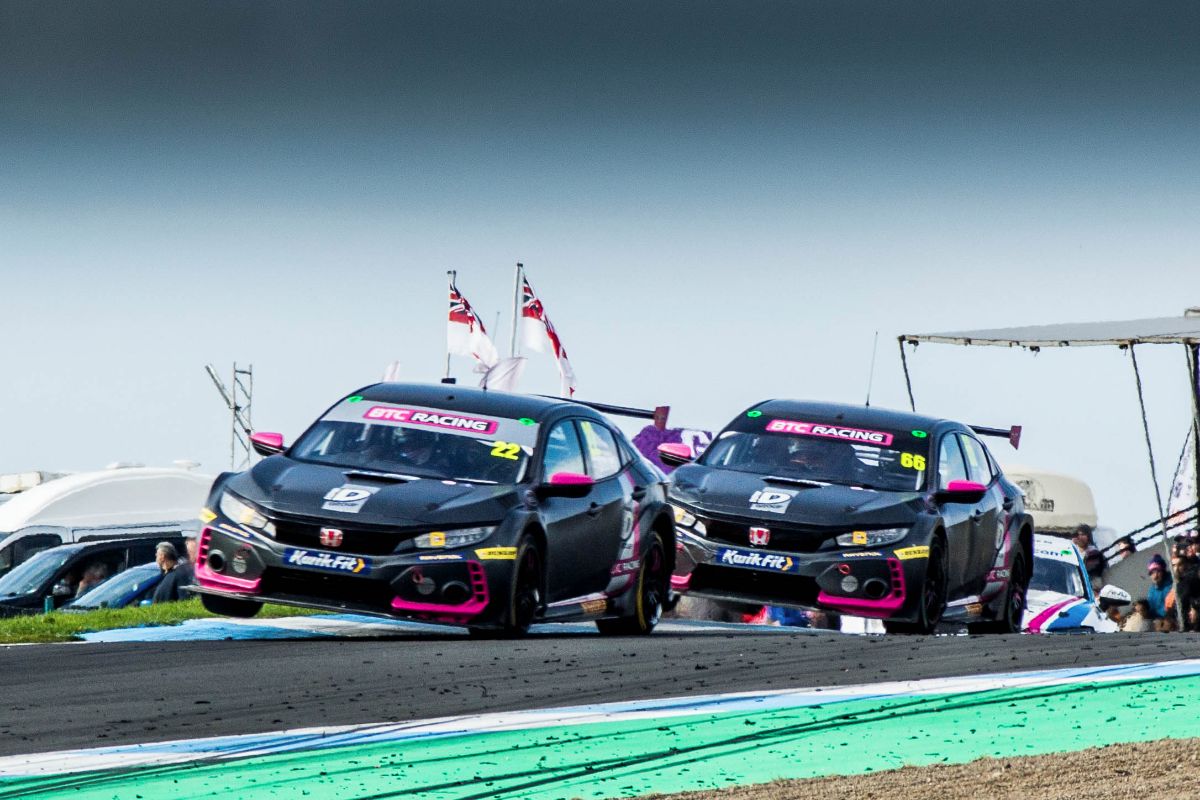 The Brackley-based team made the long trip to Scotland with drivers Josh Cook and Chris Smiley hopeful of fighting for solid results at a circuit where the Honda Civic Type R FK8 was expected to be strong.

Although practice wouldn’t pass without issues after a turbo problem for Chris in FP1, the two drivers headed into qualifying in confident mood having shown they had the pace to run inside the top ten.

Mixed results however would see Chris secure ninth on the grid for race one despite losing a lap to track limits, whilst Josh struggled for outright speed and had to settle for 20th, despite being less than eight tenths of a second away from pole.

A strong opening race for Northern Irishman Chris saw him fight his way forwards into the top six, whilst there was also forward progress for Josh despite him running the slower medium compound tyre as he finished 13th; missing out on twelfth by less than a tenth of a second to Jason Plato’s Vauxhall.

Chris would run the medium tyre in race two and found himself shuffled back to ninth in the early stages after being forced wide at McIntyres. As Josh climbed up into tenth, Chris elected to let his team-mate through only for Jake Hill to also sneak ahead – with the pair taking the flag split by the Audi in ninth and eleventh.

The reverse grid draw then put Josh on the front row for the final race of the weekend and the Bath-based racer was able to make the most of his position to secure second place and his seventh podium of the year.

It leaves him 30 points off the overall championship lead, and a single point clear in the Independents’ Trophy.

Having just missed the reverse grid draw, Chris lined up in eleventh for the start but one of the drives of the day saw him fight his way through to fourth place at the finish; leaving him 16th in the overall standings and seventh in the Independents’ Trophy.

Next up for the team is the home event at Silverstone on the weekend of 28/29 September.

Chris Smiley (Carrickfergus), #22 BTC Racing Honda Civic Type R, said:
“There have been plenty of weekends this season where I could have had results like this but for one reason and another, I haven’t been able to. I know what I’m capable of, but when you get taken out by another driver as has happened various times, you aren’t able to show it…

“I’ve been strong all weekend and it was just a shame that in race two when I let Josh through, Jake Hill also sneaked past as without that I’d have been at the front for race three with a car that was good enough to win.

“To still come through from eleventh to fourth shows what we can do as it isn’t easy to overtake around Knockhill, and I made a number of hard and fair moves to get up to where we finished.

“My job now is to help Josh, and I will do everything I can to help him and the team to win the Independents’ championship. If I can get a win then I’ll be going for it, but Josh has had a great season to be right up there in the standings and I’ll be giving my all to help him.”

Josh Cook (Bath), #66 BTC Racing Honda Civic Type R, said:
“Saturday was tough and we didn’t find the sweet spot in qualifying, which was a bit of a surprise after practice. It made race day a challenge, but we had a plan to try and focus on race three and it paid off.

“Races one and two were all about trying to make up places and we had a strategy with the tyres that we managed to make work to our advantage as we were on the better tyres when we needed to be.

“It wasn’t easy to come through the field because everyone has been so close in terms of lap times, but the driving standards were quite good and the only damage I picked up was in race two when people ahead checked up when Ash Sutton and Matt Neal clashed.

“It would have been nice to get a bit higher up in that one, but as it was, we ended up on the front row for race three and it was good to end up with another podium finish. What we need to do when we get to Silverstone is make sure we qualify better, and then we can look to look to score more points from the first two races.

“I love the two circuits that are still to come and having closed the gap to the championship lead, I’m confident about the remainder of the season.”

Bert Taylor, BTC Racing team principal, said:
“We’ve come away from Knockhill with another strong weekend and I’m pleased that both drivers have been able to pick up some strong results.

“For Josh to take another podium and close the gap in the championship from where he started race day is great, while Chris has shown the pace that we all know he has to get three solid results having avoided some of the bad luck he’s had this season.

“To be in contention for three championship titles with two rounds remaining is a great achievement and we have to push hard to keep this form going at our home round next time out.”