The Trade Price Cars Racing team fought hard on track in tricky conditions to bring both cars home in the points as the Kwik Fit British Touring Car Championship headed to Silverstone for the ninth round of the year. 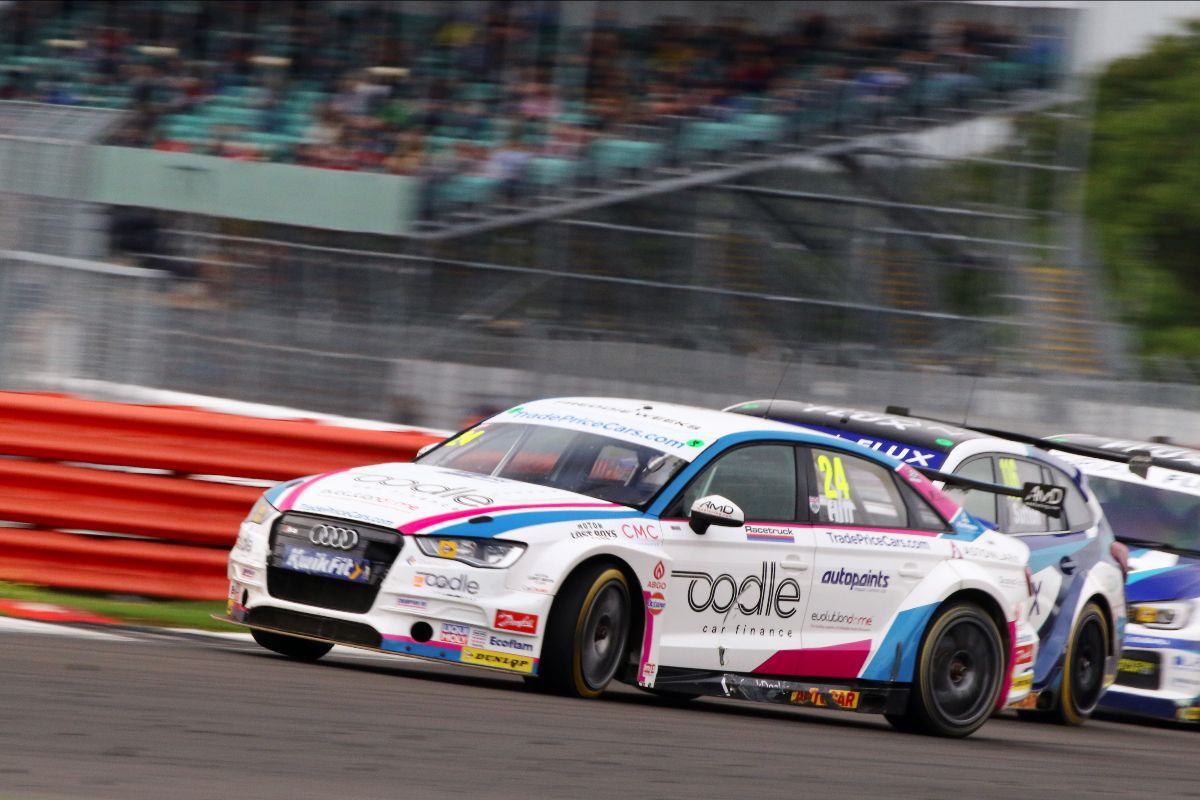 The team, run on behalf of the award-winning Essex-based motor dealership by technical partners AmD Tuning, was hoping to build on a breakthrough weekend at Knockhill but it would prove to be a much more challenging weekend on track.

On the back of his first win in the series, rising star Jake Hill endured a frustrating qualifying session to end up 22nd on the grid for the opening race of the weekend – even though his best time was just half a second off pole.

Although he was to make up a place at the start, Jake slowly started to work his way through the field and would eventually make his way up to 16th place at the finish, just missing out on securing the final point.

A similar result would then follow in race two, which was red-flagged due to worsening weather conditions, leaving Jake to try and secure some points from the final race of the weekend.

The arrival of more rain as the action kicked off led to a number of drivers electing to pit during an early safety car period to switch to wet tyres, although Jake elected to stay out on his soft Dunlop rubber.

Having climbed to the fringes of the top ten prior to the safety car coming out, Jake showed impressive speed and car control to work his way through the order despite the conditions worsening, and climbed as high as third at the three quarter point of the race.

Unfortunately, the increasing levels of rain would ultimately favour those who had switched to wets as Jake slipped back to eleventh at the finish, although that was still the best of those drivers to have remained on slick rubber.

Team-mate Mark Blundell was hoping for another solid weekend in the sister Audi S3 and he bounced back well from losing track time in free practice to a mechanical issue to secure 28th on the grid for race one, having lapped within a second of pole.

The former F1 racer went into the opening race in confident mood and had made up three places in the early laps before he was unfortunately forced to retire after being clipped by the BMW of Stephen Jelley when he got out of shape at Becketts.

That left Mark at the back of the grid for the second race of the weekend and he was unable to make up much ground on the opening lap after being forced wide. A solid drive from there on saw him climb up into the top 20 as rain started to fall, before the safety car was deployed to remove a car from the gravel.

With the rain intensifying as the race restarted, Mark moved up into 18th and was lapping quicker than the cars ahead when the decision was made to red flag proceedings due to the worsening track conditions.

Having lost ground on the opening lap of race three after contact in the challenging conditions, Mark was one of the drivers who elected to switch to wet weather tyres behind the safety car and rejoined back down in 25th place.

Biding his time as track conditions came to him, Mark then started to storm through the order, breaking into the top 20 by lap 16 and then moving into the points scoring positions just six laps later.

He would eventually cross the line in 13th place for his best result of the season to date, and his second overall points finish.

Mark Blundell, #8 Trade Price Cars Racing Audi S3, said:
“We didn’t do it the easy way, but I’m really pleased to be able to go away from Silverstone with some more points under my belt and two decent race results.

“It was unfortunate that race day started on a low but there was nothing I could have done to avoid what happened. I could see the cars ahead battling for position and I tried to get the inside line onto the back straight. Jelley then had a moment and came back across into the car as I was going through, which put me out.

“It meant there was work to do in race two and I was happy with the progress we were making after the opening lap. It was a shame for me that they red-flagged it, because I think we could have scored points if it had gone the distance.

“Race three was a challenge in the conditions but I really enjoyed it and it was great to score some points to pay back the team, and also all of my partners for their support – particularly on a weekend when we had a lot of them with us trackside.

“I finally feel like I’m starting to get my head around what needs to be done to extract more from the car, which has been difficult given how different it is to the cars I have raced throughout my career. Hopefully we can now end the year well when we go back to Brands Hatch.”

Jake Hill, #24 Trade Price Cars Racing Audi S3, said:
“It’s been challenging this weekend and the car didn’t quite perform how we expected it to. We needed to take a bit of a different direction with things earlier on because when we did that for race three, the car was a lot better.

“Had the rain not come down as heavy as it did, I think we could have had a podium finish as the car felt great in those slippery conditions and I was storming through the field. I think I showed my worth to hang on for as long as I did on the slick tyre, and it was good to be first car home on dry rubber.

“Going into the final weekend of he season, I can still finish inside the top three in the Independent standings, and that has to be the target to cap a strong year on track.”