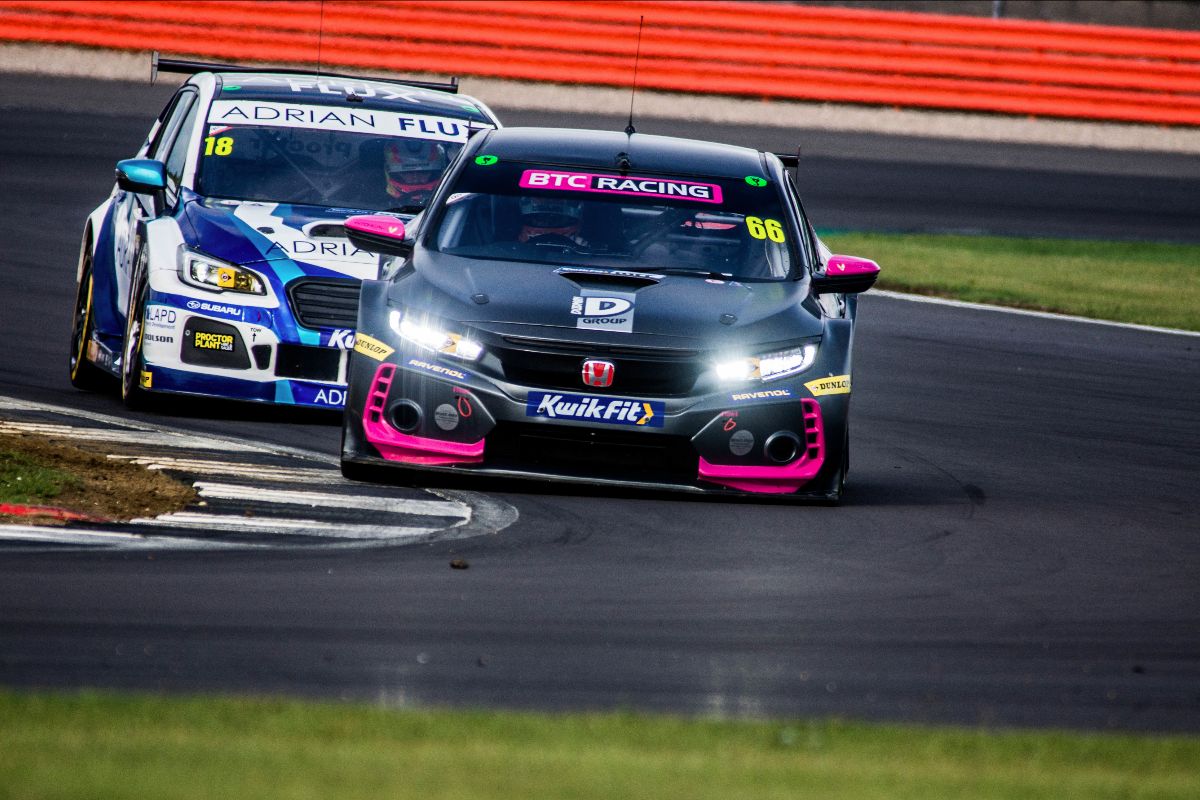 The Brackley-based team headed into its home race looking to build on a solid weekend at Knockhill, where Josh Cook had secured an impressive podium finish and Chris Smiley had battled to three strong points finishes.

Qualifying around the short National circuit saw both Honda Civic Type Rs lapping strongly, with Chris matching his best qualifying result of the season to secure second on the grid and Josh lining up in P9 despite the additional success ballast on his car.

Although he would slip back to fifth after a slow getaway, Chris wasted little time in battling his way back into the top three when the opening race kicked off, fighting ahead of Tom Oliphant and Matt Neal to run in third.

It was a position he would then hold to the finish ahead of Josh after he made the most of a strong start to jump into the top six on lap one before also passing both Oliphant and Neal.

The pair would maintain their places through the opening laps of the second race before Chris was forced wide as Oliphant’s BMW tried to come through, dropping him behind Josh on the road.

Chris would slip back to eighth spot as Josh continued in the top four until contact dropped him back to seventh, with the two Hondas then running together for the remainder of the race.

As rain started to fall, the pair had fought back up to fifth and sixth when worsening conditions saw the race red-flagged.

Race three would prove to be an action-packed affair after further rain arrived at the circuit just as proceedings kicked off.

A fine start from Josh saw him rocket up into second on the opening lap before he battled ahead of Ash Sutton’s Subaru at turn one and he would lead the race until lap 14 when those cars to have pitted for wet tyres finally fought their way to the front.

Despite being on the wrong tyres for the conditions, Josh continued to run inside the top four until contact from Dan Cammish at turn one damaged the rear suspension and forced him into the pits, resulting in him not being classified as a finisher five laps down.

It would also be a tough end to the weekend for Chris, who was acting as rear-gunner for Josh early on before he lost power and was forced to retire.

At the end of the weekend, Josh sits fourth in the overall standings and has extended his lead in the Independents championship to 22 points with 60 still to play for. Chris meanwhile sits 14th overall and is just a point outside the top six in the Independents title race.

In the Teams’ Championship, BTC Racing now lie an impressive third behind the works Honda and BMW teams, and is just four points off the lead of the Independents Teams’ Championship heading to the season finale at Brands Hatch next month.

Chris Smiley (Carrickfergus), #22 BTC Racing Honda Civic Type R, said:
“Am I disappointed about race three? Of course I am, but I would have been really disappointed without the first two races. We had a good P3 in race one and I think we could have had more from race two had it not been red-flagged as we were strong in those conditions and some of the cars ahead would have slipped back in the rain.

“We’ve made strides forwards with the car, and it’s taken us time to find out how to get the best from it compared to the older Honda. I think we have shown here that we are getting to the sweet spot with it.

“To stick it on the front row and back it up with a podium was good, and I’m looking forward to going to Brands Hatch where hopefully we can be near the front again.”

Josh Cook (Bath), #66 BTC Racing Honda Civic Type R, said:
“We deserved more this weekend and I’m a bit gutted for the guys in the team that we haven’t taken more points from it. We clawed back some points from the contact in race two and I was pleased with how I drove in race three before someone turned into me and broke my suspension.

“I needed the points from that race and I’m gutted that we didn’t get them, but there is nothing that I could have done in that situation.

“We’ll go to Brands Hatch with a chance of the title, and I wouldn’t want to be one of the three in front of me as it’ll be elbows out as far as I’m concerned. I have nothing to lose, am confident in the team and we’ll see what we can do.”

Bert Taylor, BTC Racing team principal, said:
“It’s great to have secured another podium finish this weekend and once again, both drivers have done a cracking job on track. We’ve shown good pace across the weekend from the moment we hit the track, and it’s unfortunate that we couldn’t get more from the final race, as it would have strengthened our position in the standings.

“As it is, we still have a chance of the overall title and Josh has extended his lead in the Independent standings going into the season finale, and we’ll be giving our all to secure some silverware at Brands Hatch in a few weeks.”