Richardson Racing fights back for F4 podium at Silverstone

The Richardson Racing team battled back from a tough start to the weekend at Silverstone to secure a stunning sixth podium of the F4 British Championship certified by FIA, powered by Ford EcoBoost season. 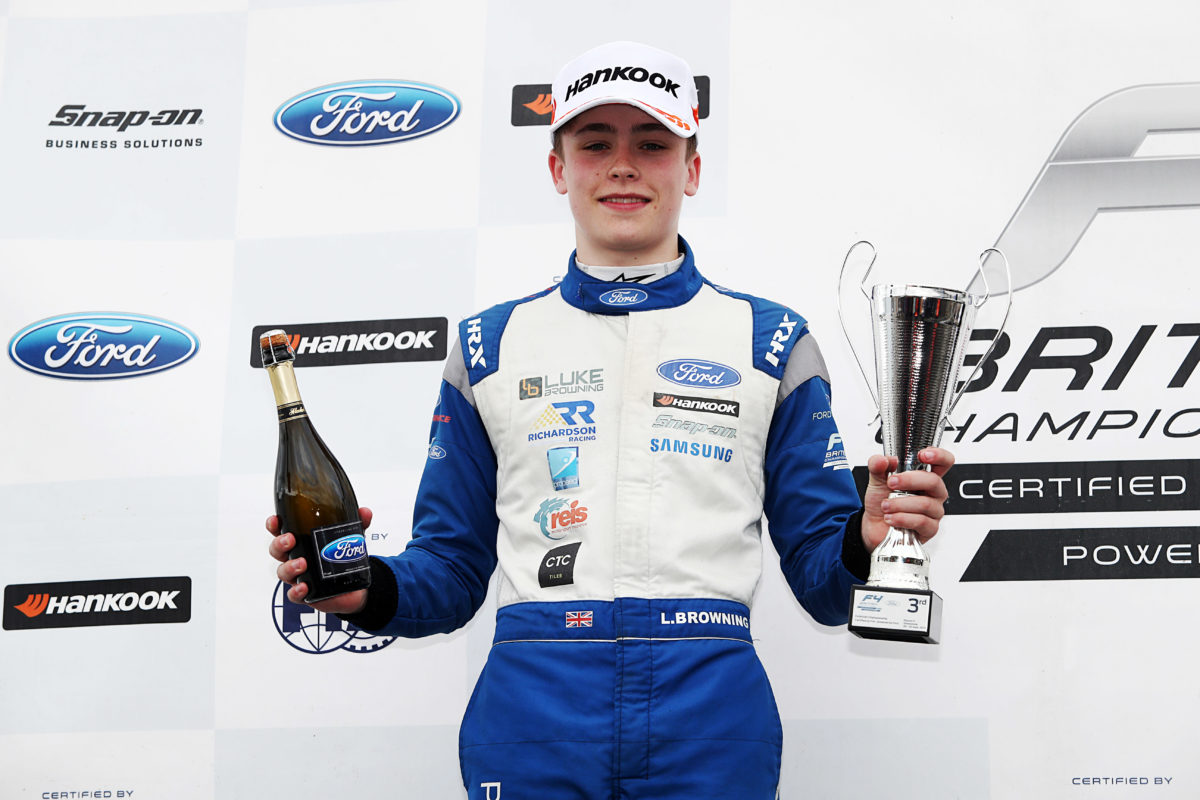 The Corby-based team headed into the weekend hoping to challenge towards the sharp end of the grid, with Cheshire youngster Luke Browning hoping to push for silverware after a brace of top four finishes in the previous event at Knockhill.

Things didn’t go to plan for Luke in a tightly-fought qualifying session however, leaving him 15th on the grid for the both the first and third races of the weekend despite lapping within a second of pole position.

With work to do in the opening 20 minute encounter, Luke made a strong start when the lights went out to jump immediately into the top ten and would then spend the entire race dicing for position with Mariano Martinez and Roberto Faria before eventually crossing the line in eighth spot.

That left Luke on row four of the grid for race two although he would lose ground on the opening lap to slip back outside the top ten in challenging damp conditions.

Fighting his way forwards, Luke would climb up to sixth place by the finish to add a solid haul of points to his championship total.

Wet and greasy conditions were waiting for the final race, and it provided Luke with a chance to shine with one of his trademark charges through the field.

Into eighth place by the end of lap one, Luke made a series of strong overtakes to sit fifth before title contenders Zane Maloney and Sebastian Alvarez clashed – bringing out the safety car and promoting Luke into third.

Luke would put pressure on Bart Horsten in the fight for second once the race restarted before ultimately settling for third place, with his points across the weekend leaving him just 0.5 points off the top six heading into the season finale at Brands Hatch.

“It’s been a tough weekend so to end it with a podium finish is great,” he said. “We went the wrong way with the car in qualifying and when the times are as close as they are around Silverstone, it really cost us and that meant we had work to do in the races.

“I got what I could from race one and then we made some changes overnight and there was a massive difference in the performance on Sunday. I love those tricky conditions and we showed strong pace in the final two races.

“I would have been happy to get up into the top six in the final race considering we were starting at the back, so a sixth podium of the year is great, and shows how much progress we made across the weekend.

“Brands Hatch is a circuit I love and hopefully we can end the season on a high there in a few weeks time.”