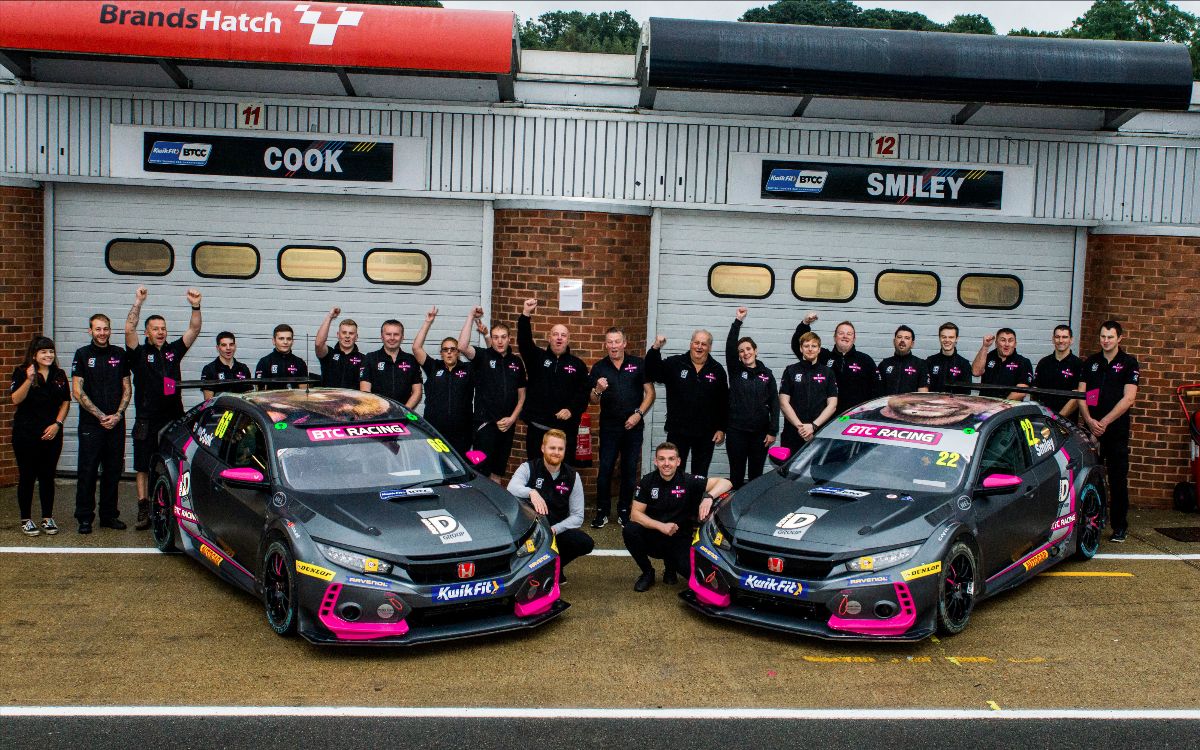 The Brackley-based team headed into the season finale in contention for three titles, with Josh Cook having a chance of both the overall and Independent titles and the team in the mix for the Independent Teams’ championship.

Qualifying around the challenging Brands Hatch Grand Prix layout was held in tricky wet conditions, but the two Honda Civic Type Rs were right on the pace – with Chris Smiley posting the seventh best time and Josh lining up directly behind him in eighth place.

Josh would climb up into the top six on the opening lap of race one, which started with the whole field on slicks but with a rain on the way. A moment at Hawthorns on lap four saw him run wide and drop down the order before he elected to pit during a safety car period to switch to wet rubber as the rain started to fall.

Unfortunately, Josh was unable to make the most of the decision to change tyres when a fuel pressure issue saw him forced into retirement. Capping a tough opening race for the team, Chris was then forced out himself just three laps later whilst running in eighth place after a stone thrown up by a car in front pierced the radiator.

With both cars at the back of the grid for race two, the team elected to run a split strategy – with Josh starting on wet tyres but Chris on slicks in the hope that the damp circuit would dry out.

Josh would make up eight places on the opening lap alone to run inside the top 20 and would work his way through to 13th place by the finish, leaving him in a solid place on the grid for the season finale.

Chris’ gamble on slicks would ultimately prove to be the wrong call as low circuit temperatures meant it was too late in the race before conditions improved enough for the slick tyres to come into their own, meaning he crossed the line in 24th place.

With his outside chance of the overall title having gone with his race one retirement, Josh went into the final race in what was effectively a ‘winner takes all’ battle for the Independent title with fellow Honda driver Rory Butcher.

With Butcher starting towards the front of the grid, Josh was well aware of the need to make up places quickly and he was a man on a mission in the opening laps, storming through the field to run third overall behind Butcher by the end of lap four.

Josh would heap the pressure on Butcher for the Independents’ class lead until the performance of his soft compound tyre dropped away, and he would eventually cross the line as second best Independent in fifth overall.

For Chris however, there was further disappointment when a gearbox issue saw his car come to a halt on the green flag lap, leaving him to park up on the GP loop and watch the season finale from the side of the circuit.

Chris Smiley (Carrickfergus), #22 BTC Racing Honda Civic Type R, said:
“It’s been a difficult day. The hole in the radiator meant I had no option but to stop in race one so I didn’t damage the engine and then in race two, we went with the slicks and it just didn’t dry enough. For race three we were on the right tyre with no weight but then something let go in the gearbox on the way to the grid and that was that.

”It’s a shame because we could have won the Independent Teams’ championship this weekend, but to finish second is still a great season for us in our first year with the FK8. There have been highs and lows along the way, but that is how racing is sometimes.

“We still have plenty of work to do and I don’t think we’ve unlocked the maximum from the car on my side of the garage and there is more still to come. We have to get our heads down during the winter and come back stronger next year.”

Josh Cook (Bath), #66 BTC Racing Honda Civic Type R, said:
“I threw everything I had – and a bit more – at that final race but it just wasn’t to be. I had the pace to get to Rory but I knew I only had a few laps to try and get ahead of him. He defended well and then my tyres dropped off and that was that; it just wasn’t our day.

“You can always wonder if you would have done things differently, but what we have done has been mega this season. We rocked up at the opening rounds and won when no-one expected us to, and have never been lower than fourth in the overall championship. We could have focused on the Independent title and maybe we would have won it, but we went all out for glory and I don’t regret that decision at all.

“We can walk away with our heads held high this season as we have won more races than the factory Hondas, have had loads of podium finishes and that is without any real testing. I can’t thank Steve, Bert and Ben enough and it’s been a pleasure to work with Chris. Now we can all go into the winter and recover from what has been a tough and hard-fought year.”

Bert Taylor, BTC Racing team principal, said:
“As a team, we are over the moon with the season as a whole and I can’t thank everyone who has been involved enough. Okay, so it’s a little bit disappointing that we didn’t pick up a title but if we weren’t disappointed then we wouldn’t be human – and I’d much rather us be in a position where we have that disappointment than to have come into the final rounds with nothing to play for.

“Over the course of the season, we have grown in stature and have shown that we are capable of challenging right at the front of the grid on a regular basis, and I think that is a great achievement for a team that is only a few years old.

“We’ve had a car for ten race meetings this season that we have been learning and have done no testing, and we had a driver in Josh who was new to the team and didn’t know anyone. He has done a fantastic job for us and Chris has also driven really well and shown good speed – he just hasn’t had the luck that he needed.

“We’ve laid some good foundations this year and have to now work hard to build on them next season.”