The Cobra Sport AmD with AutoAid/RCIB Insurance Racing team enjoyed a stunning end to the Kwik Fit British Touring Car Championship season as it successfully wrapped up no fewer than three titles during the final rounds of the year. 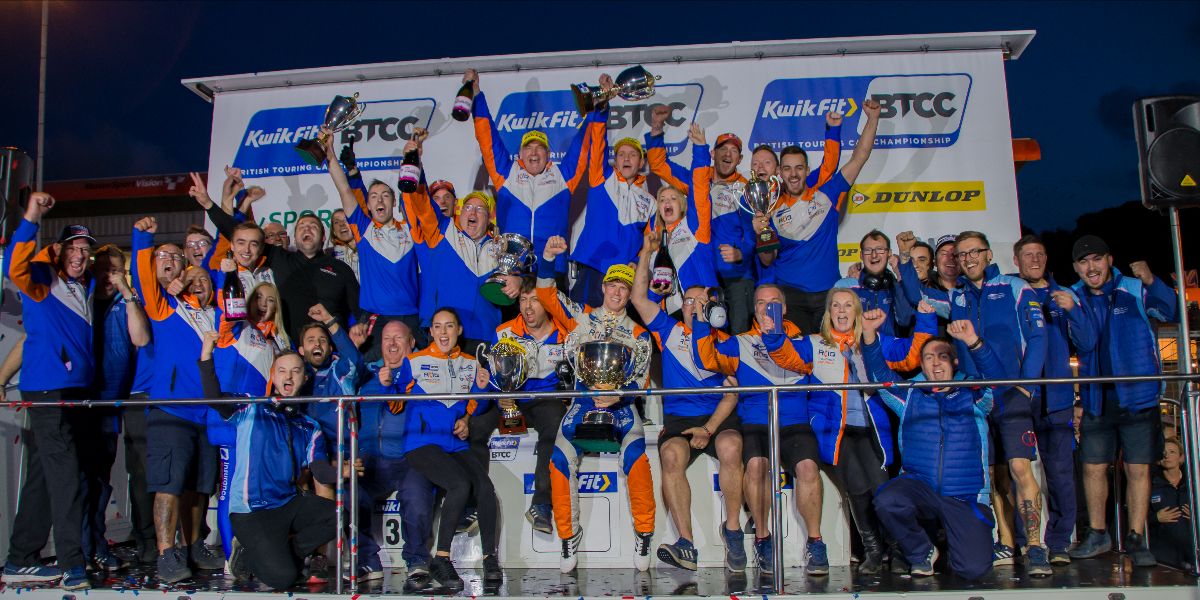 The West Thurrock-based team went into the weekend chasing both Independent class titles and also in the lead of the Jack Sears Trophy, with drivers Rory Butcher and Mike Bushell keen to make most of the pace of the FK2 Honda Civic Type R around the full Brands Hatch Grand Prix circuit.

Fife racer Rory qualified in a solid fifth place in tricky conditions in qualifying as the best placed front wheel drive car in the session, and a strong start to the opening race saw him move up into third spot by the end of lap two ahead of title hopeful Andrew Jordan.

After an early safety car period, and with rain starting to fall, Rory fought his way ahead of Ash Sutton and Colin Turkington to hit the front and would lead until the 16th lap when a charging Dan Cammish found a way through.

Running in a comfortable second, Rory only missed out on a podium on the final lap when Matt Neal and Tom Chilton managed to get ahead, having gambled on a switch to wet tyres behind the safety car.

With Josh Cook retiring from the race, second amongst the Independent class racers saw Rory close right in on his rival in the race for the title.

A tough opening lap in race two saw Rory forced to take avoiding action when two cars clashed ahead, which dropped him down the order to run outside the top ten. However, he fought back well to take the flag in ninth spot, bringing the gap to Cook down to a single point going into race three.

It was a result that also wrapped up the Jack Sears Trophy title after his only rival Tom Oliphant retired.

Aware that the final race of the weekend was a case of ‘winner takes all’ in terms of the Independent title, Rory found himself running in fourth at the end of the opening lap and then battled up into the podium places with Cook on his tail.

Knowing that he had to keep the newer FK8 Civic at bay, Rory produced one of his best drives of the season to secure the position and wrap up his second title of the weekend.

On his third outing in the car, Mike put the sister Honda ninth on the grid for the opening race with a solid performance in qualifying, although he would slip back to eleventh in the opening laps.

The former Clio Cup UK champion then started to make his way forwards however, and had climbed into the top ten before the safety car period to allow the similar Honda of Matt Simpson to be recovered from the gravel at Paddock Hill.

Continuing to make good progress, Mike climbed up to fourth going into the final lap although, like Rory, he would lose out to Neal and Chilton on the final lap to end up in P6.

A strong start to race two saw Mike jump up into fifth spot on the opening lap, but his hopes of trying to push towards the podium were ended by a drive through penalty for being slightly out of position at the start.

Dropping to the back of the field, he raced well to come through to 18th at the finish, and then came close to a points finish in race three with 16th in the season finale.

Shaun Hollamby, Cobra Sport AmD with AutoAid/RCIB Insurance Racing team principal, said:
“We had three trophies we were aiming for at the start of the season and to have won them all is absolutely fantastic. I’m delighted for the whole team because we have worked so hard and it has a been a massive team effort.

“We made some big improvements over the winter and the support of Cobra, AutoAid, RCIB and GardX has been key as their investment in us allowed us to strengthen and move forwards. We were able to get the right calibre of driver in as success like this doesn’t happen if you don’t have the right drivers. Huge thanks have to go to Rory, Sam [Tordoff] and Mike for their efforts.

“Rory was fantastic all year and the final race was his best of the season to hold off Josh like he did. Mike also did well again stepping in for Sam, who played a massive part in what we have achieved this year and who I know is happy at our success.

Rory Butcher, #6 Cobra Sport AmD with AutoAid/RCIB Insurance Racing Honda Civic Type R, said:
“I think being the chaser for the Independent title was the best thing for me coming into the weekend, as every race I just pushed hard to get as much as I could from it. I knew in race three that Josh would drive his socks off in the early laps to get to me and I had to drive at 100 per cent from the start. That was the hardest I’ve driven the car all year – it was to the maximum.

“To come away from the weekend with the Independent title and the Jack Sears Trophy for me personally, and to finish in the top five overall, is absolutely fantastic and I think it will take some time to sink in. It’s hard to believe what we have achieved.

“For the team to also win the Independent Teams’ title and finish third overall is brilliant, and you can see in the eyes of the guys in the team just how much it means to them. I’m so pleased to be part of this team and to have had this opportunity, and I’m also happy for all of my sponsors and for the team sponsors who have made it possible.”

Mike Bushell, #21 Cobra Sport AmD with AutoAid/RCIB Insurance Racing Honda Civic Type R, said
“I put in so much effort alongside Rory this season and I’m not ashamed to say I cried when he was getting his trophies. For us to have led the overall championship at one stage, and to win the Independent title has been a phenomenal effort.

“Personally, I’m a bit annoyed with myself for being an inch over the line ahead of race two as I was comfortable in fifth place before the drive through penalty, and that really ended the weekend for me as race three was a case of just bringing the car home in one piece.

“I’ve enjoyed doing these final three rounds and it was nice to hear David Addison comment on TV that it was a case of what might have been if I’d been in the car for a full season. It shows that people have taken notice of how I’ve performed, and it’s been nice to have a chance to get out on track in a top level car and race with the big names towards the front.”