Richardson Racing ends on a high at Brands Hatch

The Richardson Racing team brought the curtain down on the Michelin Ginetta Junior Championship season with one of the most dramatic wins of the year at Brands Hatch. 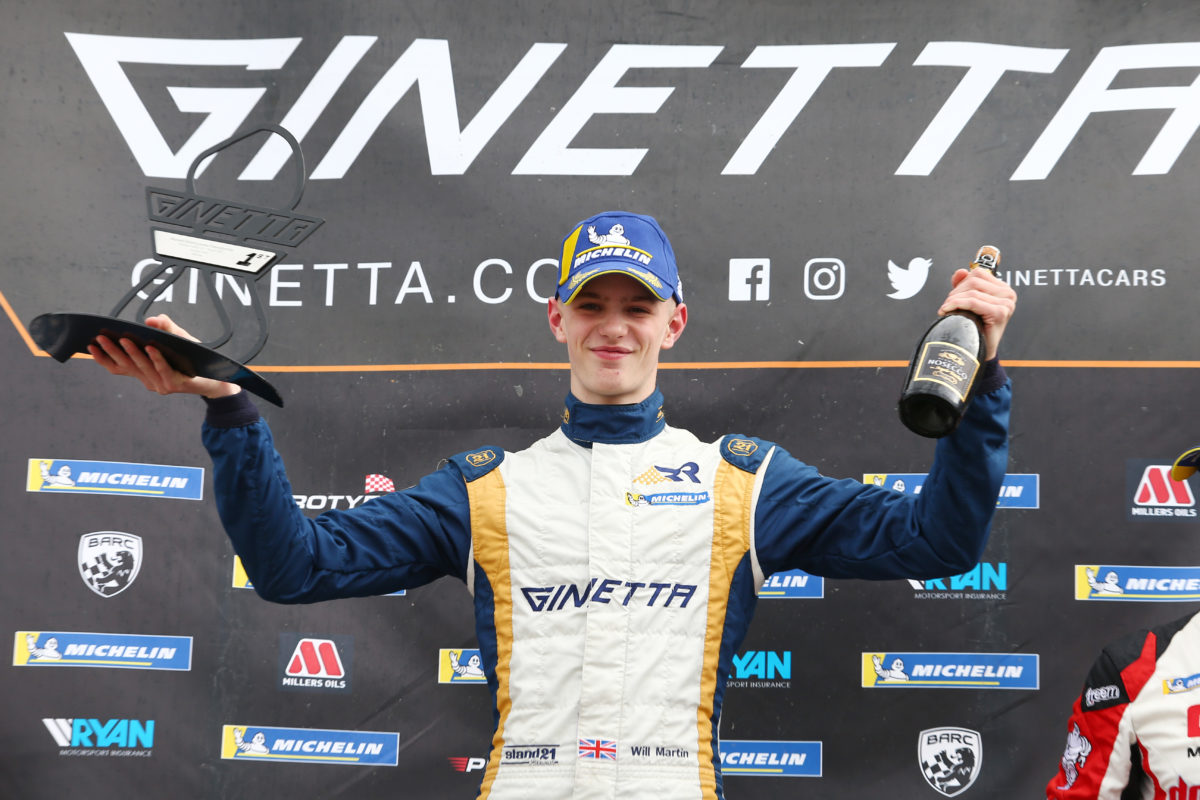 The Corby-based team headed for the season finale in buoyant mood, with Will Martin, Casper Stevenson and Ethan Hawkey eager to impress during the final three races of a busy campaign on track.

Qualifying on a damp circuit on Saturday morning saw Will leading the team’s challenge as he secured fifth on the grid, with Ethan lining up in tenth spot and Casper directly behind in twelfth.

Conditions would deteriorate ahead of the opening race, which would provide a fresh challenge for the trio. Sadly for Casper, things would come to a premature end when he was unable to avoid a car spinning at Druids on lap one, with the resultant contact putting him out on the spot and bringing out the Safety Car.

Having slipped back to seventh on the opening lap, Will was able to fight his way forwards when the action resumed on lap three, battling his way into the top four before a last lap move on Ethan Brooks saw him secure a solid podium finish.

Ethan would jump up the order on the opening lap into the top ten, and crossed the line in a solid seventh spot.

The second race of the weekend would be held in fading light on Saturday evening, with Ethan and Casper starting eighth and ninth but Will down in 16th spot; the grid having been taken from drivers second fastest laps in qualifying.

A chaotic opening lap saw Will rocket up into seventh place ahead of Ethan, with Casper the man to lose out as he dropped back to 16th.

Two safety car periods would limit the racing action but Will was able to move up into sixth before an incident at Paddock Hill Bend on the final lap forced him to retire.

It left Ethan as the best placed driver for the team in tenth just ahead of Casper as he fought his way back through to eleventh at the finish; making up four spots on the final lap alone.

Astonishing work from the team on Sunday morning to repair Will’s car ensured that all three cars were able to take to the track for the final race of the season.

Despite starting down in 19th, Will rocketed up into the top ten on the opening lap before quickly climbing into seventh after a brief safety car period. Battling into the top podium places after another caution, Will then made his move for the lead as he got ahead of Lorcan Hanafin and James Hedley into P1 just before another incident saw the race brought to an early end – confirming him as winner for the ninth time this season.

A strong run in the season finale saw Ethan secure fourth place after a battling drive from ninth on the grid, whilst Casper came from tenth to eighth to secure a place on the podium as the third best rookie finisher.

At the end of the season, Will secured third in the championship standings with Casper in sixth and Ethan in eighth, whilst the team wrapped up second in the teams’ championship.

Will Martin, #10 (Battle, East Sussex), said:
“After the incident in race two, we weren’t going to do race three as it had no impact on my final position in the standings. However, my sponsor Darren stepped up and said we should get the car out and I’m glad we did! The team did a mega job to repair it and it means that we’ve ended the season on a real high rather than a low.

“It’s certainly been an up and down way to end the season but this has been a fantastic year – the best of my career by far. I have to say thank you to everyone who has been involved and hopefully it can be the springboard to more success in future.”

Casper Stevenson, #25 (London), said:
“It’s not been an easy weekend to end the season, but it was good to secure another trip to the podium. The car felt the best it has felt all weekend in the final race, and it’s just a shame that the yellow flags meant we couldn’t get higher up the order, as we had the potential to.

“As a whole, I’m pleased with the way that the season has gone, even though it didn’t end on the high I would have liked. I think I’ve shown good pace and have taken a number of podium finishes and for my first season in the series, I’m happy with how its gone.”

Ethan Hawkey, #40 (Chislehurst, Kent), said:
“It’s been a solid weekend and a good way to end the season. I really enjoyed the final race in particular and it’s a shame that we couldn’t quite make it onto the podium because of the early finish as the car felt great.

“A huge thanks to the team for putting together such a good car for me this weekend, and for their hard work over the time I’ve raced with them this season.”