The Richardson Racing capped a strong season in the F4 British Championship certified by FIA – powered by Ford EcoBoost with a hat-trick of podium finishes in the season finale at Brands Hatch. 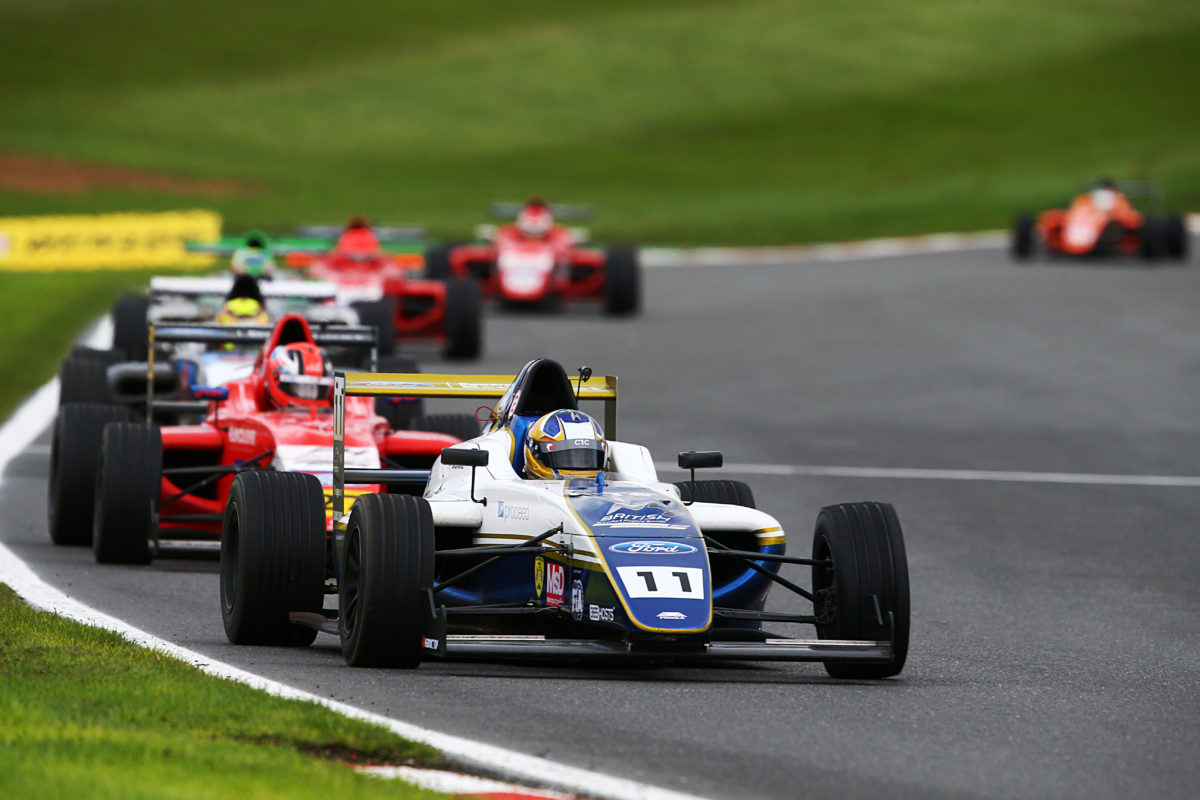 The Corby-based team headed into the weekend looking to challenge at the sharp end of the grid, with Cheshire youngster Luke Browning focused on pushing for more silverware.

Eager to end his maiden season of single-seater competition on a high, Luke produced a strong performance in qualifying to secure a place on the second row of the grid in tricky damp conditions.

Getting the jump on Alex Connor when the lights went out, Luke then took advantage of a clash between former Ginetta Junior rival Louis Foster and Zane Maloney going through Paddock Hill Bend to move up into second place.

Although he would try to find a way past Maloney after two safety car periods that backed up the field, Luke would ultimately have to settle for second place for his seventh podium of the season having struggled for visibility as the race wore on.

An eighth podium would follow soon afterwards, as Luke produced another strong showing from fourth on the grid in the second race of the weekend.

Jumping ahead of Connor on the opening lap to move into third place, Luke fought hard to keep his rival at bay before launching a late attack of Bart Horsten ahead, eventually taking the chequered flag just three tenths of a second behind his rival.

From third on the grid for the season finale, Luke would once again be a contender at the front throughout the 20 minute encounter, and made the most of an error from Foster to end the season with a second place finish.

It means Luke concludes his maiden season of single-seater competition with nine podium finishes to his name, and sixth in the championship standings.

“We could have won the first two races but I struggled with my visor misting up and had to back off a bit,” he said. “The car felt good and we were pushing in the wet on Saturday to try and get a win as I love those conditions, and we came close.

“It was difficult to know which way to go with the set-up for race three because the conditions were so changeable, but it was great to come away from it with another podium finish to end the year

“This has certainly been an up and down season for me but on the whole, I think we can be happy with how it’s gone. In my first season in the series, and on the team’s return, we’ve been able to take race wins as a single-car team and have regularly challenged at the front of the field.

“It’s gone better than my first season in the Ginetta Junior Championship went, and I was able to build on that in season two and fight for the championship. Let’s see what the future holds from here…”

Richardson Racing had additional reason to celebrate at the conclusion of the season, with Luke’s engineer Aaran Stroud being named as British F4’s Technician of the Year for his work across the campaign.